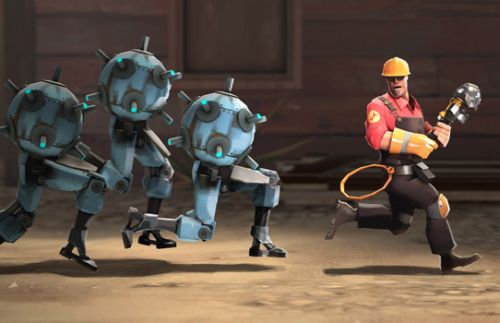 It seems so long ago that we got that surprise free update for Team Fortress 2, one in which added the Mann vs Machine co-op mode for 6 players.  In reality, it has only been two months.  One complaint we had with the mode was that it was pretty friggin hard, combined with some match making difficulties, it didn't quite catch on with us as much as we thought it should.   A new update for the game directly addresses both issues and adds new content to boot.

In the fable, of course, Goldilocks held the defenseless bear family at gunpoint until her boyfriend Chet got there, at which point things turned truly grim. This is where our story diverges from that true crime drama, because we've sidestepped the issue by adding more Tours of Duty to MvM mode. Now, in addition to Operation Steel Trap (hard), we've got Operation Oil Spill (less hard) and Operation Gear Grinder (very hard). As Chet might say, "You goddamn bears are in for a lonnnnng night."

Matchmaking updates include the ability to look for multiple missions and filter by difficulty.  Perhaps the best addition to matchmaking is the ability to have the game drop you back to the server browser after completing a mission, keeping the same people in your co-op party with you.

To get the new update for Team Fortress 2, all you need to do is fire up your Steam client.