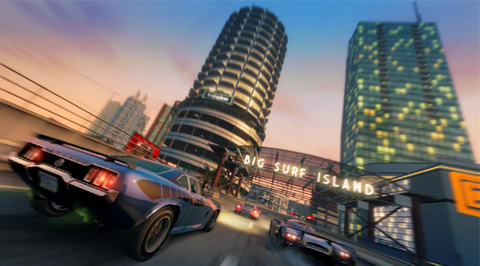 Since we brought you the news of Burnout Paradise's Legendary Cars pack, Criterion Games has announced three more DLC packs, two of which haven't even garnered enough attention to be posted on even the most desperate of gaming blogs: the Toy Cars pack, and the Boost Specials car pack.

Until now, however, Criterion has only succeeded in extracting some yawns from the gaming scene. Not to mention that none of the previously mentioned packs are free, as was once the Criterion standard...

Today, they faithfully updated their news blog with an announcement six months in the making: Big Surf Island will be unlocked in 2009...for a price. Criterion was not-so-mysteriously cryptic about both the release date and the cost of the content.

It seems like the first quarter of 2009 is turning out to be a fresh -- and expensive -- time for Paradise City racers. But as exciting as all this is, hit the "Read More" link to see what my idea of the ultimate Burnout Paradise DLC would be...

Of course, I'm only kidding...but with a car pack on the way that looks like it was taken straight from the toddler toy aisle at Wal-Mart (hint, Criterion: there's nothing appealing about toy cars in Burnout), who knows what next Friday may bring?