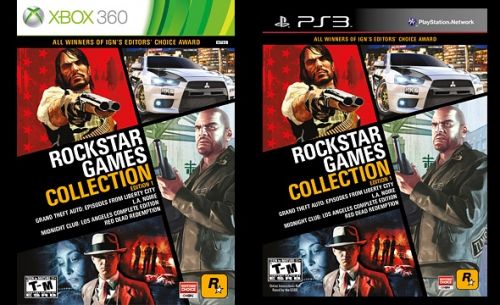 Back in the days of the ZX Spectrum I used to buy huge collections of game called things like '15 Massive Hits for £10'.  On November 6th Rockstar are bringing back this tradition, but for $59.99, by bundling several of their games together and selling them at one price.  Rockstar Games Collection Edition 1 will house the co-op friendly Red Dead Redemption, but also Grand Theft Auto: Episodes from Liberty City, Midnight Club: Los Angeles Complete Edition and L.A. Noire.

The collection will be available on PlayStation 3 and Xbox 360, on how many discs is anyone's guess!  Here are more details from the stars of rock themselves:

• Grand Theft Auto: Episodes from Liberty City – The explosive conclusion to the highest-rated game of all time, Grand Theft Auto IV, featuring two complete games on one disc: The Lost and Damned & The Ballad of Gay Tony.

• L.A. Noire – The revolutionary crime thriller featuring MotionScan, a breakthrough technology that captures every nuance of a real actor’s facial performance, providing a level of realism, detail and emotion never before seen in a video game. Featuring brand new gameplay and a dark, hard-boiled detective story, L.A. Noire became the first ever video game to be recognized by the Tribeca Film Festival.

Red Dead is a game worth picking up on its own, although we found the co-op aspects a little lacking.  The other games are just a bonus!