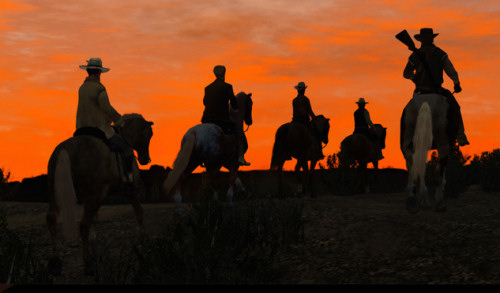 Next week, the shiny new DLC for Red Dead Redemption hits: June 22nd to be exact.  Though this DLC pack, entitled "Outlaws to the End", is certainly wanted, you won't need to pay much of a bounty, as it will be free!  We've found some details on four of the six new missions, all of which are co-op!

"The Kidnapped Girl": A gang is holding a farmer's daughter hostage at Fort Mercer.  In addition to infiltrating and releasing the girl, you must protect her from a wave of reinforcements in a stagecoach ride.  CVG has a gallery of screenshots for this mission.  In a separate news post, they outline three more missions:

"Walton's Gold"
Walton's Gang have taken control of a mining camp rich with gold. Fight through the camp and load your mine cart with as much gold as you can carry and get out as fast as you can - Walton's boys have rigged the place to blow.

"The River"
Ride a raft down river, taking out rebel encampments along the way until you reach the rebel stronghold of Nosalida and a final epic battle for the town's massive weapons caches. Watch out for Gatling gun-equipped enemy rafts.

"Ammunition"
The Mexican Army has the town of Tesoro Azul under siege. Storm the gates under heavy cannon, Gatling gun and sniper fire to destroy the Mexican artillery placements.