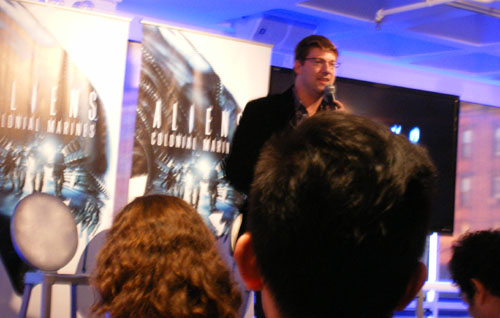 Last Friday I had the pleasure of attending the Aliens: Colonial Marines New York Comic Con Event. I'll just get it out of the way right now and admit that I know very little about the Aliens universe and lore. I have absolutely nothing against it, I just haven't gotten around to watching any of the movies. That being said, however, I have some friends who are huge fans and they've gotten me curious about the upcoming game.

Since it was a NYCC event, there were a large number of writers who had traveled across the country for the event.  I checked in, grabbed some food and drink, and mingled for about 45 minutes (shoutout to Scott Mendenko and Marshall Honorof for providing excellent conversation) while I waited for the main event to begin. The bartenders and attendents were all wearing lab coats and there were large jars with rubber aliens inside of them spread all across the room. Very nice touches. People mingling, while we wait

At around 6:00, we were called upstairs to presentation. Unfortunately, the single-player campaign demo would be hands-off, but we would be walked through it by Gearbox CEO Randy Pitchford, Gearbox co-founder Brian Martel, Aliens: Colonial Marines writer Mikey Neumann, Design Director John Malki, and Lance Henriksen - the man who played Bishop. Randy set the stage for us, and as he talked I was struck by how excited all of them were about the game. This is something I love to see at previews, because if the developers are excited about their game, you can sure bet that excitement will spread to anyone they talk to.

A:CM takes place after the first three movies (17 weeks after the third movie, to be precise). It is an in-canon sequel to the movies, with Ridley Scott's blessing bestowed upon it. The marines in the game (400 of them in total) are part of a rescue effort sent to discover the fate of the characters in the third movie. Randy emphasized that they wanted to make players feel as if they were marines from the movies, but not simply just replicate scenes from the films. It's a whole new story with different twists and turns.

We were shown several different environments from the campaign mode across two different points in the game. The first started off with a team of marines recovering from a crash on the surface of LV426. The scene involved exploration and conversation between characters, which gave us plenty of time to check out how the game looked. The engine for A:CM was created specifically for the game, with all lighting and shadows rendered in real time. On the surface of L426 lightning arced overhead and random fires (from the crash, I assumed) cast light on nearby rocks. I was very impressed by the lighting and the shadow effects - it looked damn good. As the demo player explored the level, Randy pointed out several spots that fans of the films would recognize. Obviously, I didn't, but it's a great touch for franchise fans. Eventually, our group of marines (which included Bishop) found the Sulaco and cut open the doors. The marines still have no clue what went down here, and the audience is treated to seeing the ominous aliens inside of jars in the lab. Our new marines have no idea what they're getting themselves into here. Most of this first scenario of the demo was to show off the environment as well as the suspenseful mood that the game has during parts, which (I've heard) should really be essential to any Aliens game. Our demo guy controlling the character often swapped from his gun to radar briefly, to see where everyone was (and which I'd assume shows aliens as well). As our marine went about the level placing sensors in key spots, the suspense grew as the team found more and more disturbing signs of what happened on the ship. As one would expect, it culminated in aliens bursting out from the walls and attacking.

The second level of the game we were shown focused a bit more on the combat. It also took place on the Sulaco, but this time our marines were fleeing from a horde of aggressive aliens. Sometimes scripted events happened and we were forced to watch a fellow marine bite the dust. Sometimes our NPC friends would even run over afterwards and mourn over their corpse. Our character was jumped upon several times by aliens. Valiantly, he batted them away with his gun and shot them in the face. A few times, he shot them too close to himself and was treated to a spray of acid blood. This was indicated by smoke that rose in front of the camera for several seconds (and it looked very cool). A couple of times the sides of the screen began to turn red as our marine took a little too much damage. Thankfully, he found some medpacs to heal up and continued on his escape route with the music blaring dramatically behind him. In the end, he victiorously made his escape, and the demo concluded. It's Bishop! (a.k.a. Lance Henriksen)

A:CM is certainly looking promising. Franchise fans will probably found a million little things to geek out about while they play, and Gearbox has made sure to include an appropriate amount of suspense to balance out the action. This is for sure a labor of love, and I hope it doesn't disappoint.

Aliens: Colonial Marines is due out February 12th of the coming year on PC, Playstation 3, and Xbox 360. It will support 4-player online co-op and 2-player local co-op.