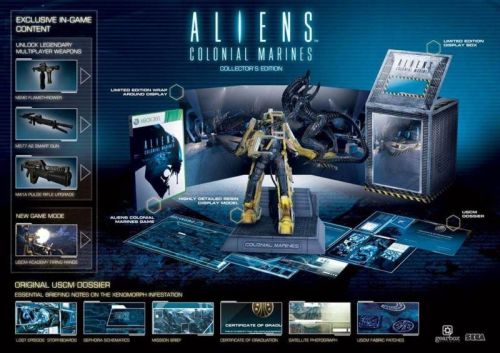 Aliens: Colonial Marines is sure to be an awesome take on the Aliens franchise, with its authentic design and 4-player online co-op. But you know what would make it even better? A Collector's Edition, that's what. Thanks to French gaming site GamesKyo, we now have a detailed picture of the Collector's Edition contents. Hope you like big boxes!

While the Collector's Edition doesn't contain a soundtrack (I love soundtracks), it still packs a punch:

Anyone who's seen the Aliens film should be proud to have a Power Loader sitting on his or her shelf; let's just hope it survives shipping better than AvP's facehuggers. I'm also going to find that DLC mighty tempting.

No word on a price or release date yet, but the game should at least ship in the second quarter of the year. Co-Optimus will keep you posted.