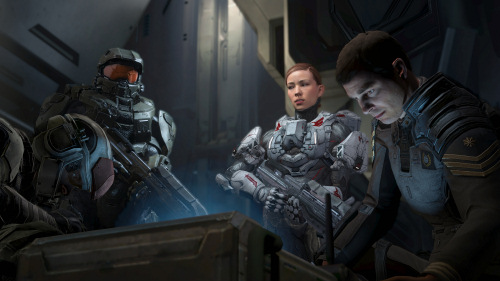 Thanks to a certain hurricane, power outages, internet outages, and several other factors - we won't have a Halo 4 review to post today like several other websites.  That said, I managed to sink a solid 4 hours into the campaign last night as well as checked out some of the cooperative options and wanted to provide my impressions of the game, the first from 343 Industries.

When you first fire up Halo 4's campaign and are greeted with the opening cinematic, you'll do a double take.  The graphical quality presented along with the the writing and acting instantly vaults the 343 up the totem poll of games with Hollywood quality cinematics.  For fans of the Halo universe and lore, there's a lot to latch onto here.  I'll admit it, I'm emotionally invested in this series having played it since the beginning, having read the books, and having listened to the soundtrack on repeat more times than I care to admit.  Watching the game's opening and the Chief bust out of cryo-stasis one more time, it was hard for me not to smile from ear to ear.

The graphical fidelity of the intro is carried over into the game itself.  From the very first scene inside the wreckage of the Forward Unto Dawn, where the Chief and Cortana have been floating for the past 4 years, to the large expansive outdoor environments that have been prevalent since the first game - Halo 4's graphics are impressive.  Easily the best of the series, perhaps the best looking game on the Xbox 360 to date. Yes, it looks this good.  Yes, this is in game.

I talked about this in my preview from E3, but the sound production and design on Halo 4 is the biggest difference you'll find.  The weapon sounds and audio cues are so gritty and powerful, it almost makes the previous Halo game's effects sound like the digitized beeps and boops from a 16-bit video game system.  The human weapons pack a serious punch, you can hear the bullets tearing out of the barrel and the casing pinging off the rocky ground.  The Covenant plasma weapons can be felt in your gut, the molten material burning through the air with each shot.  And the Promethean weapons sound advanced, technological and powerful - like you are firing a gun that wasn't quite meant for you.  But the sound changes aren't just in the weapons themselves but the enemies too.

The Covenant feel more menacing in Halo 4, and for the most part act their part as before.  But in adding a third race to the mix in the Prometheans, who battle not only the Chief and humans but the Covenant, 343 really managed to mix up the combat.  Add in new armor abilities like a deployable turret or front facing shield (equally usable by the enemy), and the combat in Halo 4 has never kept you on its toes like this. On the co-op front you have two player split-screen play though the campaign.  Each profile gets credit for their completion, XP, and anything else done within it.  The screen is split horizontally, but letter boxed to retail the 16:9 aspect ratio of each view.  It should be noted that even though you can have more players "join in" - the co-op game won't actually start locally with anything more than two.

Spartan-Ops, the game's other co-op mode, requires an active connection to Xbox Live to play.  I know this, because right now I have no internet access thanks to Hurricane Sandy.  I was unable to check out anything in this mode, but do know it starts with another high quality cinematic like the game's single player campaign.  I'm incredibly excited to hear we'll be getting one of these a week as the story in Spartan-Ops unfolds.  Up to four players can team up through this campaign, but it can be played solo as well with the game scaling appropriately.

Halo 4 is out on November 6th.  We hope to have our review up the day before launch with full impressions of the campaign, the co-op, and Spartan-Ops.