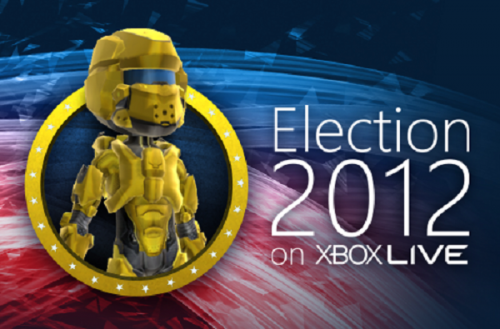 As most of us already know, the presidential elections are next month. To kick off the countdown to the debates, scheduled for October 3rd, Microsoft is giving away free Halo 4 armor Avatar Awards for those that tune into them via Xbox LIVE.

This election has the country, and gamers should take the time to be a part of this piece of USA history in the making. This new promotion set up by Microsoft will encourage gamers to not only to be informed about the presidential race, but also to get Gold Subscription members to try the new Xbox LIVE Rewards Program new type of feature found on the Xbox LIVE dashboard. Those that watch at least 30 minutes of the three presidential debate sessions through this promotion will receive a free Halo 4 armor Avatar award; a shiny, golden armor featured in the upcoming game. Codes will then be delivered via email close to or on November 1st.

Only obtainable through watching the presidential debates starting Oct. 3rd on Xbox LIVE

If you’re looking to stand out amongst your friends with this exclusive Halo 4 armor before the game’s November 6th release date (also the Presidential Election day), you must first join the Microsoft Xbox LIVE Rewards program. The live coverage of the debates will be available to all who apply through the Xbox LIVE Election 2012 Hub that was introduced in the beginning of the summer. Not only does it provide video streams of the biggest campaign coverage to date, but gamers can also register to vote through Rock the Vote’s partnership with Microsoft. Through the Hub, members can begin watching the first debate that will air on October 3rd at 9 P.M. EST, followed up by October 11th, October 16th, and October 22nd at the same time of day. Whichever political party you’re personally affiliated with, as long as you tune into the debates for a half an hour, you’ll get a free Avatar Award item; an easy way to be involved in the current events and also the gaming community as well. Be sure to pick up Halo 4 and try out the “Spartan Ops” co-op mode with you and your friends after you’re done voting on November 6th!