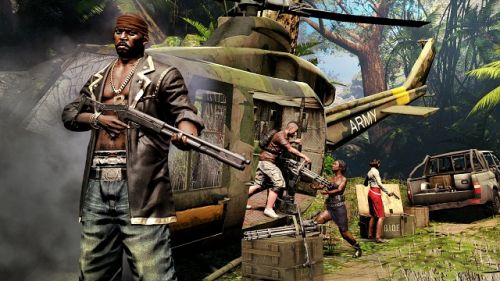 Steven Seagal is perhaps the greatest action hero of the 80s and 90s when it comes to using the assets given to him.  He does not have the muscular stature of Arnie, the wit of Bruce, or even a decent haircut.  However, in Under Siege he was a slightly portly chef that kicked butt.  Now you can play a similar chef in Dead Island Riptide with the announcement of a 5th playable character in the form of John Morgan.

As you would expect from the Dead Island franchise, John is no normal chef, he also has a naval background:

For years he has trained himself - and become a master - in hand-to-hand combat. His career in the US Navy has not taken off as he originally had envisioned, so he spends his time as a cook on a military ship. Little does he know that soon he will have to bring his skills into practice when the ship nears the island of Palanai...

Riptide remains a 4 player co-op title, but John can be used throughout the campaign like any of the other 4 heroes *spoiler* who survived the first game.  Alongside information on John the Chef, Techland have also revealed a few pictures for the upcoming game and the new town Henderson:

The town of Henderson is one of the new locations in Dead Island Riptide. Henderson is situated on the island of Palanai in the once beautiful Banoi archipelago. Palanai caters to ultra-wealthy yacht owners and eco-tourists looking to stay nearby to the island’s untouched jungle. Palanai’s center is the luxurious town of Henderson that has grown into a Mediterranean-looking port town.

Check out the gallery for the latest imagery and a picture of Dear John.