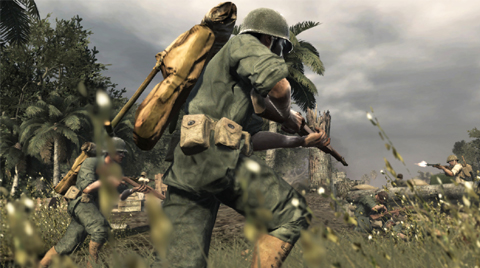 MTV's Stephen Totilo had a chance to chat with World at War executive producer Daniel Suarez, and he has posted the following tease on the MTV Multiplayer blog:

What could the new approach be? Downloadable content for the single-player campaign instead of just multiplayer map packs? New armament? New music? A map editor? “Call of Duty” fans should start guessing.

“It’s not going to be what we’ve done traditionally. I’ll leave it a little bit mysterious.”

Click "Read More" for a few more tidbits, and the source link.

In a phone interview with MTV Multiplayer just before Thanksgiving, [Suarez] confirmed that the game’s development team is working on downloadable content that will exceed the single multi-player map-pack offered for “Modern Warfare” earlier this year. “We want to do at least — the hope is — potentially two, maybe three packs out before we’re all said and done.”

But here’s one option fans shouldn’t consider: the content won’t involve a cross-over with “Modern Warfare.” I asked if the development team on “World at War” was exploring an option to bring the weapons and maps of these two most recent “Call of Duty” games into one meshed, generation-spanning experience. Suarez said nothing like that is in the works.

Announcements and -- hopefully -- more details will be coming sometime around New Year's. Speaking of: here's hoping 2009 brings a wave of phenominal co-op features as a standard in games from now on!