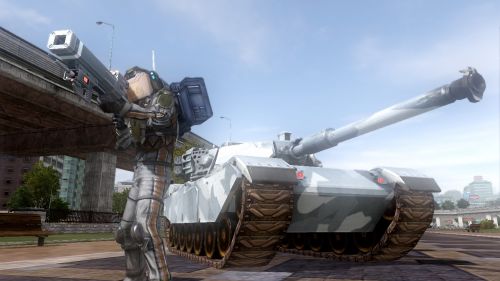 Earth Defense Force 4 may not come to North America and it may not have co-op. But it probably will. So we're covering it. We've actually covered it a little bit here and there, so we felt a data base entry was warranted. Nothing's officially official, yet - other than the game will support online multiplayer, which will probably focus on co-op. Do all of these details sound kind of wishy-washy and up-in-the-air? Yup. Are the new Air Raider screens so kick ass you won't care? Also yup.

The Air Raider joins the Wing Divers and the standard troopers of the Earth Defense Force. This blast-shield-helmeted mamma-jamma can call in all sorts of air support; including vehicles, health aids, and air strikes. At least, that's the conclusion I've come to after seeing these screenshots featuring the Air Raider standing in front of vehicles, health aids, and air strikes. See for yourself. There's a ton of them.

Earth Defense Force 4 is set to release in Japan on the Xbox 360 and PlayStation 3. EDF 4 is being developed by Sandlot, the same devs who made EDF 2017. We expect EDF 4 to come stateside, although there's been no official announcement. We also expect the game to have a strong co-op component, as that has been a staple of the franchise. Interesting co-op tidbit: The Siliconera article mentions "an APC that carries four players." So that's something co-op. Yay!