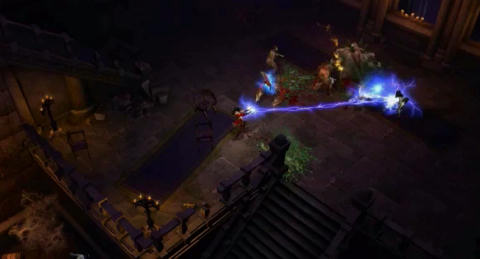 The above screenshot may be a bit dark (doh, he went there again), but the future is looking quite bright for Diablo 3.  To say that the game is highly anticipated is like saying the surface of the sun is a bit toasty.  We're looking forward to some co-op demon slaying goodness, the sooner the better.  GamesRadar has posted a preview of their hands-on time with a demo of Diablo 3 at Blizzcon.  There's not a huge amount of new information, but there are a few little morsels about the Rune system.  It would appear Runes aren't just for items anymore...

These (runes) can then be slotted into your player’s skill tree, upgrading your standard spells and abilities in unique and visually impressive ways. So the Witch Doctor’s trademark flaming skull grenade, for example, when applied with a Multistrike rune, now bounces, giving it a greater range and damage. Even defensive skills benefit from this system, with the Wizard’s teleport spell becoming an offensive weapon when applied with the same Rune.

Bouncing flaming skull grenades?  Yes, please!  A few other interesting items appear in the article, notably, class based quests and some details about the death throes of the foes you'll be vanquishing.  This year's top games are already here, and they are great.  We wonder, though, will anything be able to top Diablo 3 in 2009?