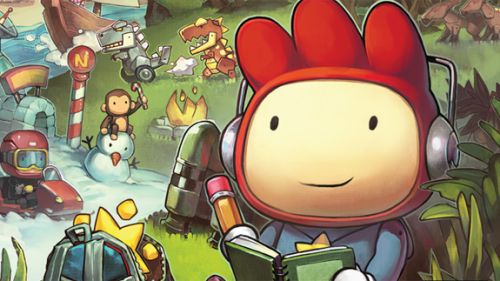 We’ve been looking closely into the Nintendo Wii U hardware and seeing what sort of capabilities for co-op it can hold. One such game that immediately comes to our minds, Scribblenauts Unlimited, practically screams co-op potential. Though it does have pretty interesting co-op features, the ideal co-op gameplay we’ve wanted since the series’ inception won’t come to fruition until 2013. The HD graphics, Nintendo character cameos, and the ability to create unique objects and share them between friends via the Nintendo Network system are fantasic features being provided for this game, but the full co-op potential of this game will most certainly be hindered for the time being until next year. Why might you ask? The simple fact being that extra Wii U GamePads won’t be available for purchase until sometime in 2013. Let us explain...

In a sense, it is like the Nintendo Wii U was specifically made for a Scribblenauts title. The main character of the series, Maxwell, carries around a pencil and notepad which he writes in to create any object he wants. Essentially, that is exactly what the player will be doing when playing this game. Through a Wii U GamePad, one player will be able to type in desired objects onto the screen to complete puzzles. Just think about all the craziness that can happen when everyone could their own GamePad, all dreaming up and spawning unique objects on the same screen! But, from what we’ve just learned, co-op will be a little bit different that any die-hard fan might’ve hoped for in Scribblenauts Unlimited’s launch. If you're the second player, choose to play as anything else on the screen but Maxwell.

So here’s how co-op is going to work initially: While the first player has the ability to move Maxwell and use his trademark ability to spawns objects onto the playing field with the GamePad, the second player (or players) has the ability to take over and control anything present on the screen using a Wii remote, such as an animal or even a car, and bring it to life. But how come both players can’t just go around creating objects individually? Why not just have two different Maxwell’s the players can control? Unfortunately for co-op fans, extra Nintendo Wii u GamePads won’t be available in stores until 2013 sometime, so only one person at a time can create the objects. Though developer 5th Cell wanted to include this features from the get-go, it just wasn’t in the cards due to Nintendo decision making. Creative Director of Scribblenauts Unlimited, Jeremiah Slaczka, said why the second GamePad wasn’t going to happen:

There wasn't even discussion of a second GamePad for a very long time from Nintendo's side, so we were just always on the assumption that there was one GamePad. Just as a commercial game designer, supporting things that are peripherals can be very dangerous. You can undercut your audience ... For us, there were potential concerns with framerate; you then have three screens running at the same time. There was no real discussion about it.

This might sound a bit disheartening for Scribblenauts fans, but the potential for future inclusion of multiple GamePads is still there.  If it hasn’t already, it most likely will be touched upon next year. These unfortunate setbacks might halter enormous co-op potential of this game, but nothing is set in stone. We're going to give Scribblenauts Unlimited our full support when it releases on November 18th, but also await its ultimate co-op experience with multiple GamePad support to arrive someday.