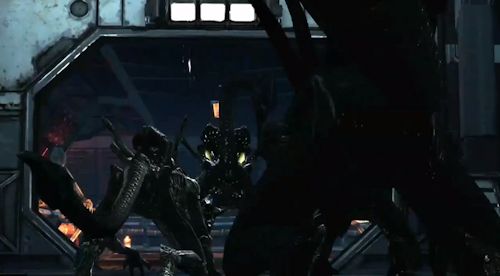 Aliens: Colonial Marines is finally going to see the light of day on February 12th,2013.  The game has the current record for longest co-op game in our database without a release, and after numerous delays, it's finally going to happen.  Slowly but surely the Gearbox developed title is leaking out details about its offerings, including a full four player co-op campaign and numerous versus multiplayer modes.  But today we have a trailer for a co-op mode called Survival.  I bet you can't guess what you do in it.

Did that Alien's head just explode by him ripping his own jaw off?  The ping of the motion tracker must have really given him quite the headache.

Aliens: Colonial Marines will be out on February 12th on the Xbox 360, PlayStation 3 and PC.  It'll feature four player online co-op on all platforms and two player split-screen co-op on the consoles.