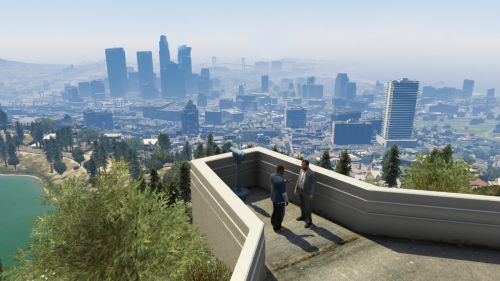 Grand Theft Auto V, or GTA V, has been revealed in the latest issue of Game Informer and it looks to continue the Rockstar Games tradition of making open world games that push the boundaries of technology and story telling.  But one thing the team has yet to tackle is a true co-op campaign in any of their open world games.  Sure GTA 4 had some co-op missions and Red Dead Redemption took things a bit further with gang hideouts and free roam, but we haven't seen anything to the depth the team at Volition have done with the Saints Row franchise.

So will GTA V finally feature a playable co-op story?  Five's story features three protagonists to play as, and players can swap between them in real time.  All three stories run in parallel, so it certainly sounds like it should be co-op.  But alas - that's simply not the case.

It would be impossible to do that and keep the level of precision we've got in this. You could make a great co-op game, but we felt that we're doing other bits of our multiplayer that will fulfill those desires in ways we think are very fun.

Here's the good news.  Rockstar is planning to have some serious multiplayer capability built into GTA V, though they haven't revealed any details yet.  The previews for the game showcase a strong focus on Bank Heists, which we all know work VERY well in co-op.  So perhaps we'll see some scenario based co-op?