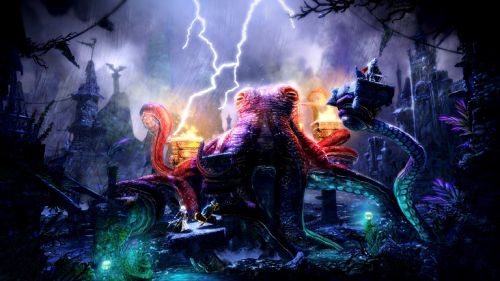 If first you don't succeed, Trine and Trine again.  This is exactly what Frozenbyte Games have done with their superb Trine 2.  Releasing the exact same game that has graced other consoles on the Nintendo Wii U was just not good enough.  Therefore, they launched Trine 2: The Director's Cut, the original sequel with added extras.  Check out the launch trailer if you don't believe me.

The Wii U version of the game will have additional environments and puzzles that did not make it into the first release due to time constraints.  Thankfully, the 3 player co-op that made Trine 2 a 5 out of 5 sensation remains.

The below trailer shows off the luscious levels, but also some of the complex co-operation that will be needed to tackle the more troublesome puzzles later in the game.  The Director's Cut launched alongside the Wii U itself, which means that the US can grab it now, but the UK will have to wait until the 30th of November to download it.