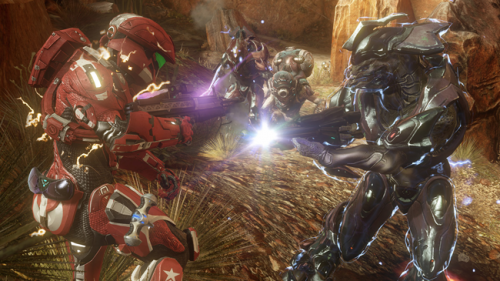 It’s no joke that Halo 4 is probably one of the best game releases of this year, and for a very good reason: 343 Industries is keeping Halo 4 busy and constantly filled with new content. Today, we have a massive amount of sweet Halo 4 news for all you competitive and co-op gamers out there, so pause that Youtube video you’re watching and pay attention, because you won’t want to miss out:

Okay, so you’ve played a good amount of competitive Halo 4 now on the online multiplayer and Spartan-Ops missions, but want more of a challenge. What if we told you that both Virgin Gaming and Xbox 360 going to be hosting the Halo 4 Infinity Challenge, offering some wickedly cool prizes to win? Opening on December 12th, gamers can register to enter this open, worldwide, free-to-enter Halo tournament on www.halo4infinitychalleng.com that could land you big in Halo treasure. After that’s taken care of, beginning five days later on December 17th, the site will track your personal scores received over War Games matches and Spartan-Ops chapters over the global leaderboards. Attained Skill levels or online ranks don’t mean anything when it comes to winning prizes for this tournament, as there will be over 2,800 prizes given out to competitors. But if you need some incentive to some extra kick ass, here’s the breakdown of the grand prizes for anyone curious: The qualifier period beginning on December 17th will go until January 10th, giving players plenty of time to rack up their leaderboard scores before making it into the tournament finals. Once the final competitors have been nominated, they will be put into three separate tier groups (depending on their results from the qualifier). Then, through January 12th to January 19th, the leaderboards will reset and selected prizes will be awarded to the best of the best players in each tier. The tippy top tiered players will then be given the opportunity to battle it out for the grand prizes.

Even if you aren’t expecting to make the top tiers of this tournament, there will also be plenty of Weekly Challenges found exclusively on Halo Waypoint for chances to win great prizes too. Check out the website linked above or Halo Waypoint for more information. Three new multiplayer maps will be available on Xbox Live for download on December 10th in the new Crimson Map Pack DLC: Wreckage, Harvest, and Shatter. If you bought the Halo 4 Map Pass or the Halo 4 Limited Edition bundle, don’t worry about how much it will cost you (absolutely nothing, because you've already paid). For those of you that didn’t, it will only cost 800 MS Points. Thankfully, these maps will be available just in time for the tournament, providing another motivator to get the best score possible on the leaderboards. The final upcoming addition to the Halo 4 universe will be Spartan Ops’ next season starting later on next month. Take a break for the holiday season during the week of December 10th, Spartan Ops will be doing its first “re-run” of the five missions from the first half of this season. Being entered into Matchmaking from December 17th until January 14th as the “Best of Spartan Ops” compilation, players will be able to play missions 1 through 5 over the next few weeks (one episode per week, as usual). If you have missed any of them over the last couple of months, then this is a fantastic time to get back into Spartan Ops.

As for the second half of Season One, it will start back up later on in January with all new episodes, chapter missions, location environments, and maps to sink your teeth into. Those that tune into Spike TV’s 10th Annual Video Game Awards live special tomorrow, December 7th, at 9:00 PM EST/6:00 PM PST will also get a first-look at these upcoming Spartan Ops missions, so hopefully it will make watching the Awards actually worth it this year. Don’t forget that you can view the show through Xbox Live, Spike.com, Gametrailers.com, MTV2, and MTV Tr3s!

That’s all that we have for Halo 4 fans for now! This should keep you more than busy with co-op goodness over the holiday break.