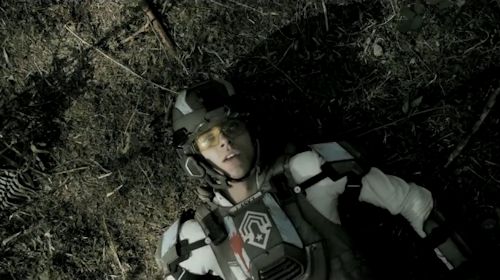 The live action series, Halo 4: Forward Unto Dawn is set to come out this fall, it's by all accounts "The Halo Movie."  At San Diego Comic Con a full length trailer has been revealed showcasing the visual style, characters and effects we'll see when the series launches this October on the web.

Set against the backdrop of a United Nations Space Command (UNSC) military academy, a group of highborn cadets are training to be the next generation of soldiers in the UNSC’s ongoing war with insurrectionists in the outer colonial planets. Among these cadets, Thomas Lasky struggles with his doubts about this war, and with the burden of expectations he may not be able to carry. As Lasky comes to terms with his potential as a military leader, the terrifying alien alliance known as the Covenant arrives and turns his world upside down. Inspired by the Master Chief, he must decide what it means to be a hero.

The story and events of the series start at the beginning of the Human and Convenant war and lead up to the events of Halo 4.  Halo 4 launches on November 6th with four player online co-op and two player local co-op.  Players can play through the single player campaign in co-op or take on weekly missions in a mode called Spartan-Ops.  Our E3 2012 preview has more.