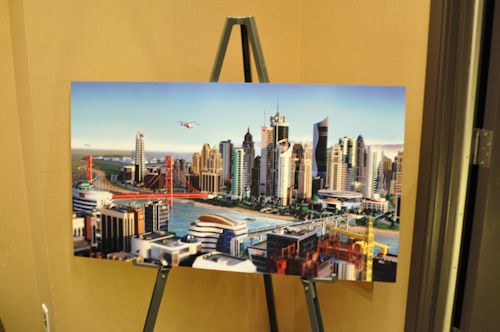 If you read my beta impressions of SimCity, you know that EA has crafted a slick sequel to the series that refines things just enough to feel fresh, but keeps a lot of the traditional strategy elements we love.  One downside to the beta was that the multiplayer options were disabled - so it was tough to see exactly how players could cooperate.  Luckily at a recent event that EA held, I was able to get hands on with the full game and play around with the multiplayer options.

Multiplayer starts at the region level.  Once you decide on a region to start your cities in, you can choose to make the region public or private.  Public regions allow anyone to join and start a city next to yours, while private would be invite only.  The multiplayer is both synchronous and asynchronous in SimCity.  The unique thing about this method of play is you can technically play co-op locally - with you and your significant other or sibling able to take turns working on their city of choice in a region.

Players are able to chat in real time and view what's going on in each other's cities in real time, but it's not a requirement for everyone to be playing simultaneously.  I asked about a messaging system to create strategies in game, for instance, telling your friends that you built a whole bunch of power plants to help everyone else out - but other than the chat system - there's no other way to communicate. The region view of SimCity also shows exactly what's going on with shared resources.  Clicking the power icon for instance shows arrows between the cities with what direction power is being sent.  The same goes for whatever utilities and services are being utilized.  Everything from power, water, and sewage can be put on a market with prices being governed by a global economy on EA's servers.  Extra fire trucks, police cars, and ambulances can also be made available for other players for a price.

Perhaps one of the more interesting aspects of the region is that players affect each other on a few higher levels.  For instance if your city is producing a lot of pollution and there's another city "down wind" - their city will be the recipient of it and that won't make your friend very happy.  It's because of this some higher level planning and cooperating will need to take place to ensure a successful region.

The region view also supplies a Great Works site.  This co-op location allows you to build, with the help of all cities in the region, a unique structure.  This can be an airport or an arcology or a similar large type structure.  Resources are contributed to the pot by all cities and the bonus effects of the construction are given to all players.

SimCity is out for the PC on March 5th.  You can play co-op with as many friends as a region supports cities - up to 16 - and that can be played online, or, as we talked about earlier in the preview, even locally taking turns.