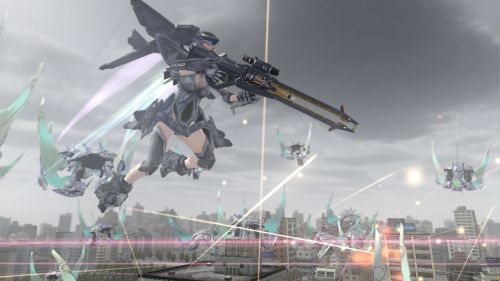 Earth Defense Force 2025 will be coming Stateside in 2013. This is hardly a surprise. A Japanese teaser site for Earth Defense Force 4 appeared way back in July, and this past September I predicted it would be renamed EDF 2025 if it ever saw a US release. I'll go ahead award myself an Obvious Gaming Prediction point. If you've played an EDF game you know what to expect. If you haven't, well, I'm not saying you're a bad person, but you're probably a bad person. Oh, and you should check out that Japanese teaser site again, whether you played it or not. It's got an awesome loop of game play footage running on the main page.

The Earth Defense Force franchise is known for giant enemy insects, campy story lines, and easily destructible environments. What they lack in polish and visuals they make up for in B-movie fun. Sandlot, the developer of Earth Defense Force 2017, is back for this installment. Vicious Cycle developed last years EDF: Insect Armageddon, which was pretty good, but it lacked the campy, addictive magic of EDF 2017.

They better keep the Japanese voices, or at least leave them as an available option.

Earth Defense Force 2025 will support four player online co-op. The previous titles had local co-op, so we hope that feature makes a return. EDF 2025 will be out sometime in 2013.