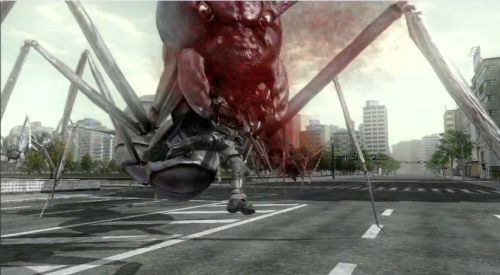 Get ready for more EDF fun. Earth Defense Forces 4 (I have no idea why "forces" is plural now, but it is) has a brand new announcement trailer. We first brought you news of the bug-busting follow up to Earth Defense Force: Insect Armageddon back in July. Some new information has recently come out of Polygon, via the Japanese super site, Famitsu.

Earth Defense Forces 4  is a direct sequel to Earth Defense Force 2017.  The invading Ravagers, once thought to have been defeated by the mighty Storm 1, have simply lain dormant. The year is 2025, and they're about to go Godzilla all over everything. Publisher D3 is bringing back Sandlot to develop the title, eschewing the events of western developed EDF: IA.  This is a wise decision. EDF: IA was a lot of fun, but it lacked the charm, personality, and most importantly, the replayability of EDF: 2017. The following trailer should make fans of 2017 feel all warm and fuzzy. Also, there's a jetpacking woman, because why not?

We don't know much about the co-op details. We do know that the EDF franchise has supported co-op for years, so we expect part four to follow suit. According to the Polygon article:

...the main new feature is full online support - D3 is still mum on the details, but it looks like online gameplay will mostly be co-op oriented.

Of course, their Japanese may be as bad as mine, but I'm still willing to bet the game has co-op. It should be available in Japan on the Xbox 360 and PlayStation 3 sometime next year. I expect it to come stateside as well. As soon as we know the co-op details we'll pass them on to you.