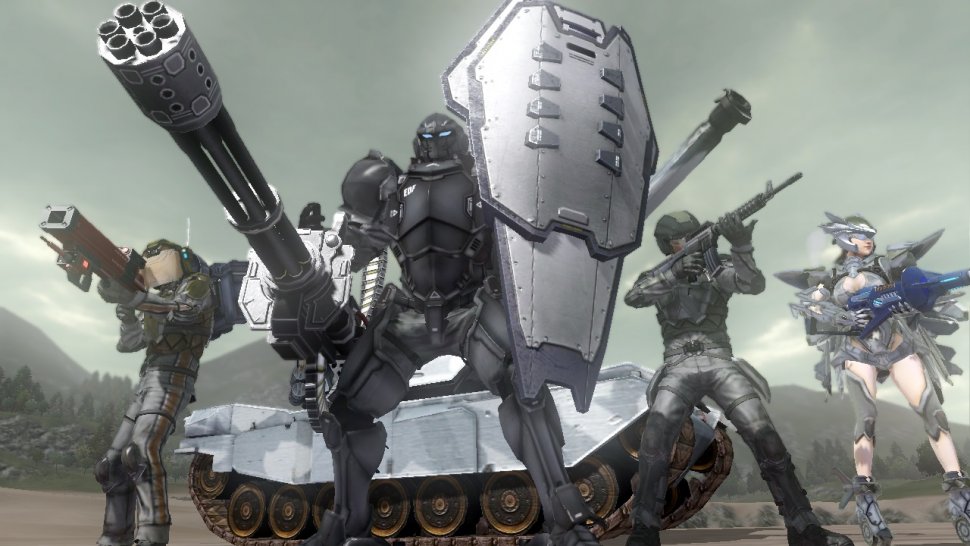 Go ahead. Get it out of your system now. Do the chant. I'll wait. Done? Good.

The first thing you need to know about Earth Defense Force 2025 is that Sandlot is back! This is the development team who made Earth Defense Force 2017 an addictive, campy romp of a shooter, which fans in turn made into a cult classic. My wife and I put dozens of hours into 2017's split screen co-op mode and we must have killed a bazillion bugs. Maybe more. Probably more. I should have counted. I don't want to take away from EDF: Insect Aramageddon. I enjoyed it for what it was, but it didn't have the heart and soul (or dozens of levels and millions of screaming insects) of 2017. I played EDF 2025 at E3 2013 and I can happily say this is the Earth Defense Force sequel you (and I) have been waiting for.

I went hands-on with three of the four classes. I played as the Ranger, Fencer, and Wing Diver. The Ranger is versatile and familiar, think of your normal EDF soldier, like Storm 1. The Fencer is a slow moving beast of a warrior who can topple Hectors with overwhelming firepower as well as crush his enemies with a massive hammer. The Wing Diver is armed with Ravager tech, which means kick ass laser weapons - and she can fly, making her invaluable for fast moving targets. I began a local co-op game with Miki Takahashi, executive producer for publisher D3. She played as the Air Raider class. This new soldier could call in air strikes, vehicles, and other support items.

The Air Raider sounds off in the latest trailer.

The cheese is strong with this one. If you want something with a more Eastern flavor, I suggest this.

Miki showed me a few practical functions of cooperative play. We were on a mission to destroy  some Shield Bearers, walking robots who generated a large dome of energy, protecting themselves and other Ravagers from long range attacks and air strikes. My lumbering Fencer and the other soldier classes could walk through their force fields. I made short work of the first robot, but I found my dual-wielding destroyer was too slow to effectively move on to the next target. Miki suggested I hop into a nearby APC. She took the wheel and drove me to the next firefight. (Fencers can't drive APCs, so you'll need a buddy to drive your cumbersome bulk to the battle.) She could also paint targets for my heavier weapons. There was a real feeling of cooperation with two players. I can't wait to take on the Ravager hordes with with three other players. Under the dome of the new Shield Bearer. A familiar Hector stalks in the background.

EDF 2025 just feels right.  Dozens, if not hundreds, of giant insects were obliterated during my short play session. Buildings crumbled as if made of matchsticks. Health and armor pick ups littered the battlefield. The game looks much, much, better than EDF 2017 and Insect Armageddon, but it isn't a graphical powerhouse (not that fans will mind). The menus looked, well, they looked Japanese, but they were similar to the 2017 menus. The whole game felt refined, but comfortably familiar.

Miki Takahashi informed us of all the new features coming to Earth Defense Force 2025 in our interview:

The five levels of difficulty have returned, including the daunting Inferno mode. Miki informed me the game will have "more missions than we've ever had before." So we're looking at over fifty levels of bullet-belching, bug-squishing, robot-wrecking madness. There will be underground levels, too -because you NEED underground levels in a proper EDF game!

EDF 2025 was a cooperative standout at E3 2013. Fans of the series should be very pleased. The new character classes encourage player cooperation, and make the game much more than a simple four player third person shooter.

Earth Defense Force 2025 supports two player local co-op, four player online co-op, and combo co-op. It will launch in Japan this July. Sadly, we'll have to wait until February for it to come stateside due to ongoing localization. I only care about three simple letters: E. D. F.