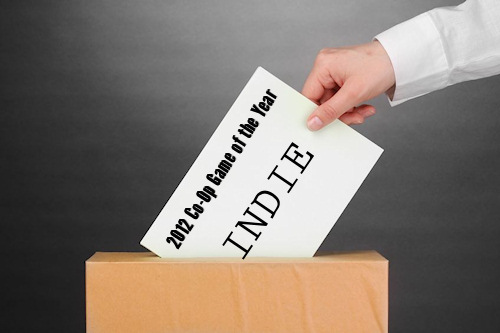 Once again it's almost time for the Co-Op Game of the Year awards.  This year the field has been decidingly less competitive than previous years (2008, 2009, 2010, 2011).  That said there's still a tough decision on your hands.  We've split the voting between two categories this year - AAA Games and Indie games.

So we'd like to hear what your favorite co-op game of the year was for 2012.  We've narrowed it down to 5 games we consider to be indie - that is those that are downloadable and developed by a fairly independent studio.  If we missed your favorite indie game, feel free to leave it in the comments.  Winners will be announced by the end of the year.