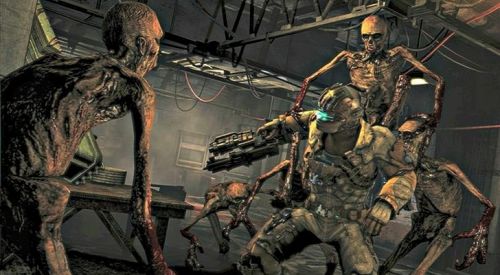 We are sure we aren’t the only ones with co-op buddies that yell into their microphones to magically control their game better. For Dead Space 3, however, Kinect voice commands have been integrated into the game, giving angry gamers a legitimate reason to use their loud, vocal mouths to enhance their overall control and in-game experience.

This being the first Kinect supported title to have voice commands that deal specifically with co-op, many things can open up for those who have the hardware handy. Instead of developing the commands around movement, EA decided to make the commands work around simple actions that revolve around player control. When playing co-op mode, players can say voice commands to the Kinect to produce desired in-game effects, such as: reloading/switching weapon, accessing your inventory, activation of stasis, quick heal, and revealing the objective trail for example. Check out the new video below to hear a quick rundown of some commands players can use in-game, from Executive Producer of Dead Space 3, Steve Papoutsis:

Co-op specific commands like: "Revive partner", "Give ammo", and "Locate partner" to help keep the buddy system on hand (or mouth in this case). Different dialects are even being used for the Kinect voice command software, so this game should mesh with Kinect very well, if opening menus or pressing buttons isn’t a player’s thing. It will be interesting to see how well the voice commands will work with both players using the commands in couch co-op play, especially during the many intense, horrific moments the game is guaranteed to have.

We’ll be readying our voices now, because February 5th and Dead Space 3 will be here before we know it. When the game does arrive, however, we won't be the few of many who will yell sexually explicit nonsense to try and be original either.