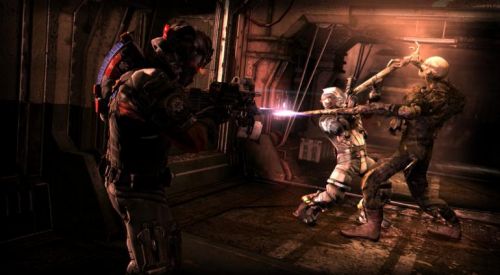 The Dead Space 3 launch date is slowly creeping toward us. EA is throwing their marketing weight around with a launch trailer that has appeared during almost every single commercial break I've seen since posting it three days ago. It was cool on Monday, but Isaac's "angry face" is starting to get to me.

Lucky for us, there's a brand new trailer out that covers some of the story behind Dead Space 3. Well, not really. There's a line that explains Isacc's motivation for trying to tickle fight the necromorphs once again. I'm currently on Chapter 10 of my first playthrough of Dead Space 2, so I might be missing something. Maybe some of you more experienced space engineers will pick up on clues dealing with plot elements that I have yet to experience. One thing's for certain, this video has a lot more action than the TV spot.

I'll admit I'm excited for Dead Space 3. I played through the first game last week and I hope to finish up the sequel this weekend. I'm curious, as I'm sure many of you are, as to how co-op will impact the game. Nick and I played through the demo cooperatively and I thought the horror theme was totally overshadowed by pure action. It was still a hell of a ride.

Dead Space 3 supports two player online co-op. You can always play solo if you don't want to use the buddy system. It launches next week, on February 5th, for the Xbox 360, PlayStation 3, and PC. Read up on EA's plan to extend the life of the game, including unlockable features and campaign add-ons, here.