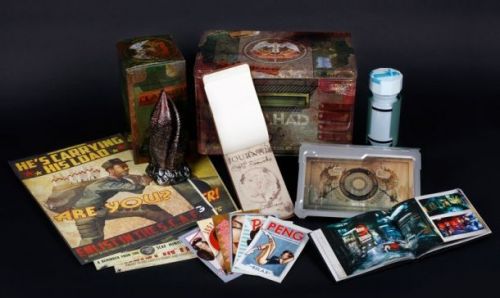 Heads up, Dead Space fanboys! The Dead Space 3 Dev Team Edition pre-order bundle will offer all of the extra content found in the limited edition bundle, minus the actual game and in-game bonus content. The question here is: do you like new toys?

In case you weren’t ready to purchase Dead Space 3 this February, there’s lots of nice merchandise that Dead Space 3 developer, Visceral Games, has included with or without the actual game in their “Dev Team Edition” bundle. This second version of their original Limited Edition bundle, going for $160 in North America, includes all of the revealed extras found in the Limited Edition version (Dead Space 3 game in any version and bonus weapons/armor skins). For $100 dollars, you can own the following in the Dev Team Edition bundle:

8" Black Marker Statue: The Black Marker is an alien artifact found on Earth in 2214. This Marker is a custom molded and painted polyresin statue, and everyone's fingers are crossed that it doesn't end up driving people insane.

Aluminum Data Pad: Before there were holograms, there were layered plates of projected data on glass. This flipbooks recalls the nostalgia of the 200-year old technologies from the Sovereign Colonies era, showcasing an array of fascinating characters, ships, Necromorphs, and aliens from Dead Space 3. This Data Pad is a 10" by 7" hinged aluminum flip book that features 9 sets of pages made up of framed PET sheets and printed cardstock backing pages.

Bound SCAF Jotter: Doctor Earl Serrano, the head of Marker research on Tau Volantis, kept a careful journal of his findings under the watchful eye of the Sovereign Colonies military arm as he uncovered the shocking first-ever archeological contact with true aliens. The Bound SCAF Jotter with Dr. Serrano's notes has 20 pages of Dead Space lore and some blank pages for your own discoveries.

SCAF Posters: Nostalgic posters for an era long gone, the SCAF represents the government prior to EarthGov 200 years ago, when space travel was done without Shockpoint drives, and was only for the bold and the courageous-and the military. Set of three 12" by 5" vintage-feeling posters printed on 80-pound paper.

Peng Postcards: Peng as a phenomena stretches back over 200 years, as evidenced by these Sovereign Colonies-era postcards! No one knows who started Peng, or what its origins are. It had morphed into a pseudo-sexual morale booster for the troops even back then. The pack comes with 6 vintage post cards.

96 Page Mini Art Book: A beautiful collection of the most haunting and visually-stunning concept art used in the production of Dead Space 3, produced exclusively for the Dev Team Edition. Book measures 4.75" by 6.5". Only 5,000 of these will be available, so don’t wait too much longer! February 5th and Dead Space 3 will be here sooner than you think! Get your Limited Editions and Dev Team Editions here on their official website. Oh, and don’t blame the carefully crafted Red Markers on all the hallucinations you might get; that’s the large amounts of co-op gaming talking.

Before telling these people to "shut up and take your money", be sure to watch the official promo video for the bundle below.