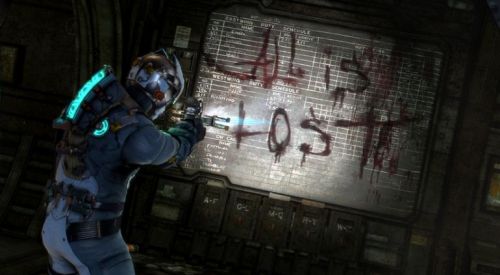 Last week there was a bit of a hullabaloo concerning microtransactions in Dead Space 3. Players can now spend real life money on in-game digital resources. It was as if EA had never charged players for better items in a Dead Space game before (they have). Not only has EA charged consumers for advanced weaponry and skins, people seem to love it. Most Marketplace items have at least a four star rating --and we all know the Xbox Live Marketplace star ratings are infallible. Or not. The point is, people have been paying for Dead Space extras for years.

Okay, I hear you. You spent your hard earned cash and you don't want to drop another dime on gun parts or tungsten or kryptonite or whatever the shops have for sale. Well lucky for you, there's a little work around. The fine folks at Game Front have posted a video showing how to farm unlimited resources. It's in Chapter 8, it's easy, and it will probably be patched soon. But you and I know how to handle patches, now, don't we? Check out the video and witness the defanging of EA's microtransaction scheme.

There you have it. Enter the shack, grab the respawning randomly generated item, leave the hut, repeat. Simple.

Now since I'm not that far into the game, I have no idea if this technique is time-efficient. If I'm going to be rolling with the Dead Space 3 version of the BFG after 20 minutes, I might be tempted. If I have to go in and out of this everlastinggobstopper of a shack for 10 hours to get what I want, I may just pony up the $10 bucks. I think my time is worth more than a dollar an hour. Is yours?

Dead Space 3 supports two player online co-op. It's out now on the Xbox 360, PlayStation 3, and PC. We'll have our Co-Op Review up for you shortly.

EA recently contacted us with this information in regards to the "glitch:"

The resource-earning mechanic in Dead Space 3 is not a glitch. We have no plans to issue a patch to change this aspect of the game. We encourage players to explore the game and discover the areas where resources respawn for free. We’ve deliberately designed Dead Space 3 to allow players to harvest resources by playing through the game. For those that wish to accumulate upgrades instantly, we have enabled an optional system for them to buy the resources at a minimal cost ($1-$3).

So there you have it. That's actually pretty awesome. Having sunk a dozen hours into the game I'm not bothered by the microtransactions at all. Resources are actually rather plentiful. Part of the fun is hunting down supply caches with a pal. The microtransactions are more a matter of convenience for people who would rather shell out a few bucks than explore the world. Their loss. We'll have our full Co-Op Review for you on Monday.