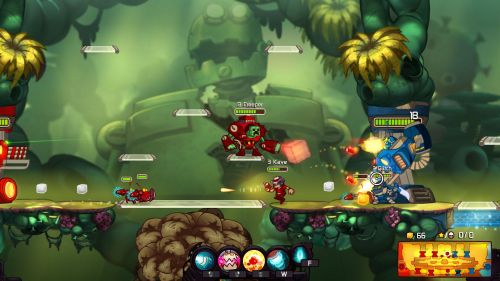 Awesomenauts’ recent update, Patch 1.13, has Mojang and Ronimo joining forces! Robotic character, Clunk, has been given a brand new skin and sound effects that creepily familiar.

That’s right: Clunk has been granted a special Creeper skin on Awesomenauts, mostly because his explosive abilities closely resemble the infamous Minecraft mob. If you pllay the game over on Steam (sorry Xbox players, nothing here for you), look forward to trying out the new skin for Cunk, by turning him into the epic “Creeper Clunk”. It was a dark and stormy night. You run around the Awesomenauts base, but too late you realize that remote spot in the back where you forgot to place a torch. You look around frantically but can’t spot a thing... until... SSSSSSSsss BANG! Creeper Clunk is all up in your grill!

This skin won’t be available right off the bat, however. Players will have the opportunity to unlock Creeper Clunk when they enter into an online multiplayer match. Members of the Ronimo development team will be adorning it in the next few days, requiring you to kill them or anyone else who’s wearing the skin, before it’s yours.

This new skin for everyone’s favorite Awesomenaut, Clunk, can’t be bought or downloaded anywhere! The only way you can get it is to hunt one down in-game and kill it dead!

Fans of both games (such as myself) will absolutely love the new animation of Clunk’s nuke and the pixelated Minecraft pick in-hand. Get out there and find those Creeper Clunks! Finally, I’ll leave you all with the 1.13 patch notes from Romino’s blog as well:

New features
- Creeper Clunk skin! Obtain the unique Creeper skin by killing an enemy Clunk wearing the skin. Initially only developers have it, and we will be playing using the skin in the coming days. Try and beat us!
- Matches will now start with full teams much more often. The host of a game now waits for six players to be ready before starting the match. It waits a maximum of two minutes and then always starts. The time the host spends in the Character Select and Loadout Select menus is deducted from the waiting time, so the maximum waiting time is the same as before (the average waiting time is longer now).

Vinnie & Spike
-Shot, Sharky & Remora upgrade now also improves the range for The Godfish
- Shot, it is now possible to start a Spike Dive or Smokescreen while shooting.
- Dive, the spike graphic has been adjusted to better match the damage range of the spikes.
- Dive, unlock of Rigged casino games now shows the correct icon.
- Smokescreen, Mammoth Sock with Holes upgrade stage 2 now adds 2 seconds of invisibility, instead of 4.
- Smokescreen, Coco will no longer stay invisible while holding down the attack button.
- Reduced camera vertical deadzone size.

Voltar
- Heal, the height of the droids has been increased slightly, so that controller players can now normally hit them with the heal beam.

Major fixes
- Bots have been made a bit smarter, and easy bots have been made easier.
- Fixed that on AI Station, the red team would often get one droid less than the blue team.
- Fixed that using two Keyboard-only control schemes in splitscreen would always claim to have conflicted buttons.
- [Mac only] CMD Tab now works on Mac (also with CMD M and CMD H).
- [Mac only] Fixed that Retina displays would only use part of the screen in windowed mode.
- [Mac only] Fixed that shift tab sometimes did not work until the game was restarted.
- Changed colours in shop to make what has been bought and what has not been bought distinguishable for colorblind players.
- Removed Christmas decorations.