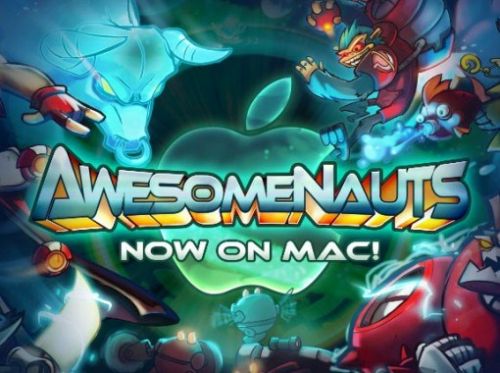 One of the more pleasant co-op surprises in this past year in gaming was the MOBA-style Awesomenauts that was initially released on PSN and XBLA. Up to three players could team up to to do some good ole fashioned comp stomping against three AI opponents in order to go laning, feed foes, and other terms that I have no idea about. However, others seem to know what's up and must be playing quite a bit. Since its release back in May, the game's seen a PC release, a slew of patches, tweaks, and updates, and even a new character or two or five. For all you fans of MOBA games that are also fervent Mac users, your day has arrived. Awesomenauts is now available on Mac through the Steam client. Finally, PC players and Mac players can team up in wonderful co-op harmony.

Best of all, if you already own the game on PC and are one of those folks that also owns a Mac, then good news! You automatically own the Mac version, too!

If you're new to MOBAs, or curious just what you'll be getting into with Awesomenauts, here's a little snippet from Tally's review of the game:

MOBAs traditionally have multiple “lanes,” each with a few towers. Awesomenauts adheres to this staple, boasting two lanes with two towers each per side. As map awareness is key in this type of game, a map is clearly displayed in an unobtrusive position. Red and blue players, minions, and towers are clearly marked on the map, so it’s easy to keep track of which tower is under attack. The goal of the game is the same as all MOBAs: players want to push down lanes, kill towers, and eventually kill the opposing team’s core...

Before entering a game, players get to choose their hero and their loadout. The loadout consists of 4 categories: upgrades to the [active-mapped] skills and passive hero upgrades (like more health or increased movement speed). The skill upgrades do things such as increase the damage of a skill, add an effect to it (e.g. silence or stun), and so on. In the loadout, players can only choose 3 upgrades per category out of an eventually potential 6 upgrades per category. This adds a healthy amount of customization to the game. One should note that just because an upgrade is chosen, doesn’t mean the hero gets to benefit from it right away... In Awesomenauts, players get to pick how they want it to get stronger through this upgrade system.

Finally, no announcement would be complete without a trailer/teaser to go with it, and developer Ronimo Games doesn't disappoint. Enjoy the wonderful cheesiness of this video that fully embraces the source material for the game (i.e., 80's Saturday morning cartoon shows).