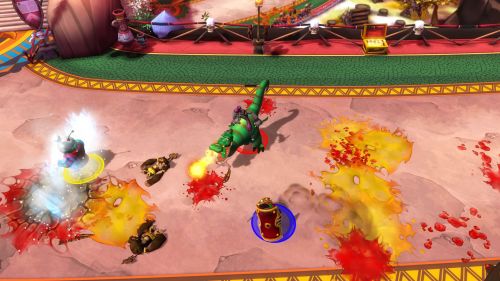 What do we have here? I stop paying attention for a little while to handle some backlog business, and suddenly we have three cooperative games coming out in one week?!?! Is it September already? It's not? FANTASTIC! This week we have a dungeon crawler, a military shooter, and a 6DoF shooter.  Let's do this.

DungeonLand (PC) Now where have I seen this game before? It seems like no matter where I go on the site lately, there it is. Watching me. Hmmm. Anyhow, we interviewed one of the producers, Joe Fricano, back in November. He let us know all the co-op details. 3 player online co-op, 3 player local co-op

Heavy Fire: Shattered Spear (360, PC, PS3) This is an on-rail shooter that looks, well, honestly it looks pretty pedestrian. The four player couch co-op might be worth checking out with a few friends. Or enemies. 4 player local co-op

Retrovirus (PC) This is a 6DoF shooter. That means six degrees of freedom. Which I'm told that means it's like Descent. Two players can get lost in cyberspace together as they play through the campaign. 2 player local co-op, 2 player online co-op