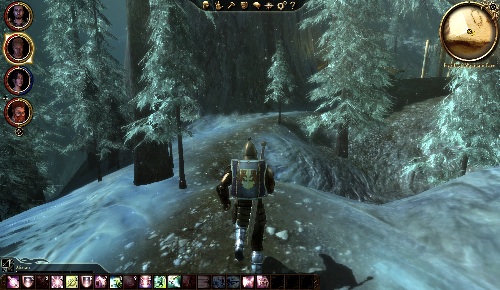 I'll admit it, I put way too many hours to count into Bioware's Baldur's Gate on the PC more than 10 years ago.  So despite what you see in the above screenshot, when I glared at the screen at the NY Comic Con, I was shocked to see something that looked eerily similar to the classic title so near and dear to my heart.

Despite the lack of any multi player, including co-op, you'll find Dragon Age as the definitive D&D RPG for the PC, Xbox 360 and PS3.  Yes, this game IS coming to all three consoles.  If Bioware gets their way it'll be a simultaneous release on all platforms, though there are some doubts about the PlayStation 3 version according to Jay Watamaniuk, the game's community manager. Despite the Oblivion look here, you won't see this too often.

Jay had an interesting story regarding the game, which was announced as recently delayed.  "You know, when it was announced that EA had bought us, a lot of people were unsure of what would happen,"  referring to the track record of EA at the time of pushing games out too soon, "but when they asked us if we could get this game out in March or April, we told them we could but it would be tight.  So instead they decided to push it to the fall and give us a lot more time to really polish it."

My guess is this decision also helped in allowing for a simultaneous platform release.  In fact, it appears the controls for the console versions are still being nailed down.

You begin the game by creating a character and then following through their "Origin" story, the original subtitle of the game.  This hour to hour and a half provides the intro and the background for the game specific to your character.  From there it's onto the 50 to 90 hours of content the game provides.  With around 11 or 12 NPCs at your disposal, you'll find the same inter-party banter that made the Baldur's Gate series so lively.  Speaking of banter, every piece of dialog in the game is recorded with somewhere between Mass Effect's 500,000 spoken words and Baldur's Gate's 1.2 Million written words. Emotional decisions aren't going to be so cut and dry.

I asked Watamaniuk what is favorite feature of the game was.  "Our dialog system isn't black and white, players are forced to make hard choices."  For instance you might be presented with the option to kill one group or kill another group - but which one of those is the "good" option?  It's a whole lot of shades of gray is Dragon Age.

With the few minutes I had with it, the game surely impressed me.  Anyone familiar with the previously mentioned Baldur's Gate or Neverwinter Nights series will be right at home.  Spell and environmental were gorgeous, and the game's semi-realtime combat system works well.  At any point you can stop the action with the spacebar and queue up commands for your four party members.

Bioware rarely if ever has made a mediocre game.  Dragon Age has the potential to be the cream of the crop for the developer.