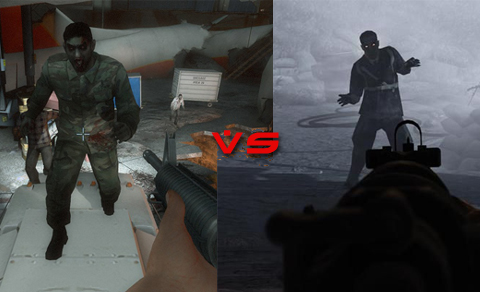 This time, we're pitting Left 4 Dead against the Call of Duty: World at War Nazi Zombie mode. IGN has a two-page write-up that throws both game modes into a cage match and declares a winner for each round. While it's disheartening for someone like myself to see Left 4 Dead pound my beloved World at War into the ground, it's a good read from Jason Ocampo.

Hit the "Read More" link for my favorite excerpts, and for the full article's source link.

If there's one weakness to Left 4 Dead it's the limited number of scenarios. Still, each of the four scenarios in the game has five levels that cover everything from forests, cities, sewers, and even an airport. There are 20 level totals, which is a boatload compared to Nazi Zombies' lone level, which is set in a drab bunker in the middle of a torn-up battlefield. Think of it as a concrete tomb.

Nazi Zombies adheres to the original zombie concept, which is basically a shambling, walking corpse with poor coordination. Sure, the zombies get faster and tougher the further you get into the game, but ultimately they look and move like zombies should. Left 4 Dead goes for a more modern, revisionist take on zombies. These zombies are less like walking dead and more like enraged people.

On paper, Left 4 Dead is the superior zombie game. Of course, that makes sense, since it's an entire game while Nazi Zombies is merely a bonus mode tacked onto the end of Call of Duty: World at War.

Of course we recognize that Left 4 Dead is a full game and CoD's mode is a bonus game so directly comparing their qualities isn't exactly fair.

Don't forget that tonight (Thursday, December 11th) is the Xbox Live Co-Op Night for World at War! See you online!

Bonus content: while we're eradicating WWII-era France of Nazi Zombies, others have been preparing their children for the future apocalypse! We present to you "Left 4 Aidan"...