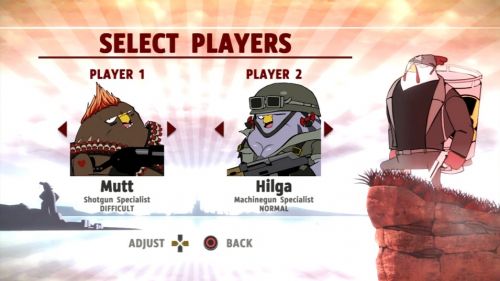 Killing large amounts of evil, totalitarian penguins is back! Like we covered late last year, Rocketbirds: Hardboiled Chicken will be arriving onto PlayStation Vita early next week.

The quirky art style and the demented, comedic value of this game alone should be enough reason to check out this game once. But if PS3 gamers need another incentive to purchase this game on the Vita, a small discount is automatically applied for owning the game beforehand. Additionally, two new exclusive characters, Sniper Guy and Agent H, will become available to use in the 2-player online or local ad-hoc co-op mode, along with the other Rocketbirds: Hawk, Mutt, Esteban, Chief, Keets, and Hilga. Finally, two new difficulty settings, a screen tilting feature, improved graphics, and a new end boss will round off the Vita version. Do check out the official PlayStation Vita launch video of Rocketbirds below:

Regardless of the average reviews Rocketbirds got on other video game sites, we gave the PlayStation 3 and PC co-op mode some pretty good praise over here (lots piggy back riding and shooting things). If anything, it will give gamers something cooperative to look forward to for their Vita handhelds.

Rockebirds: Hardboiled Chicken will be arriving on the Vita network this coming February 12th.