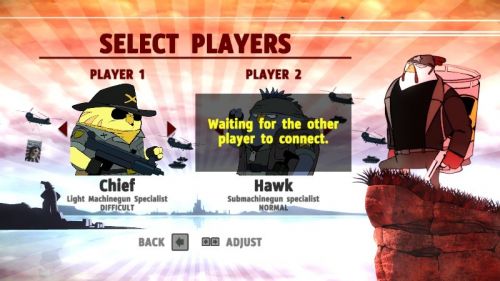 After spending some time with Rocketbirds on PC, I'm mostly impressed. The game combines well-drawn 2D sprites and backgrounds with occasional 3D background elements and lighting effects. It's a cool and distinct look. The titular chicken(s) will run through expansive levels, shooting down multiple enemy birds (who take multiple shots to kill), climbing on ledges, and even engaging in a bit of jetpacking. The animated cinemas look pretty cool (if a bit low resolution), though the voice acting is downright terrible. Check out our Co-Op Review of the PSN version for more details.

The computer version can run in various windowed resolutions or full screen, the former of which should be handy if you have to watch your email while playing or something. It automatically detects the Xbox 360 controller, names the buttons appropriately in the controls menu, and allows the controller to navigate menus. Naturally, you can set who gets the controller in local co-op or just use two controllers if you've got 'em.

The addition of online co-op is most welcome, but the implementationc ould be better. After selecting the online mode, you either invite a friend or choose to search for a partner. Before the search begins, you'll select the stage to play (only the first one will be unlocked initially), and finally you're taken to the screen shown above. From there, it's just a long waiting game.

It seem to me that putting players into the matchmaking lobby should come before the stage select. Is the game only trying to match you up with someone who chose the same stage, or just anyone who chose online co-op? They would have had to have chosen a stage before being put into the matchmaking pool, after all. Hopefully the developers add a Quick match option in the future.

Matchmaking issues or no, Rocketbirds: Hardboiled Chicken is a fine addition to the Steam lineup. It's always great to see PC games with local co-op, and you can always play online with friends who also have the game. Rocketbirds costs $9.99 - get it here on Steam.