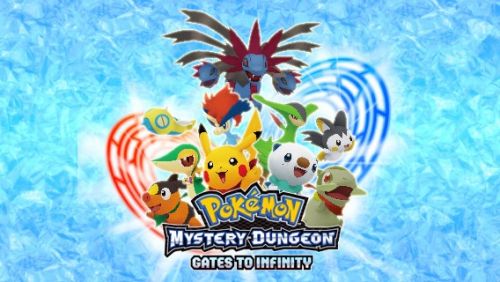 This new cooperative mode, dubbed "Companion Mode," will allow you and up to three buddies the chance to explore the depths in search of loot. If you want to team up with your friends you are going to need to do it locally, as the game will only feature local play support. Don't get your pokeballs twisted however, because the items you find and experience you gain is yours to keep for the single-player "Hero Mode."

It also bears mentioning that the latest Pokemon Mystery Dungeon outing will be the first to feature DLC -- day one DLC at that. On launch day, four mystery dungeons will be available on the Nintendo 3DS eShop, with one of them being available for free until April 30th. These downloadable dungeons will feature new items to dig up and more Pokemon to play with. Nintendo has promised more content in the future at regular intervals.

Another first for the series, Gates to Infinity will also feature StreetPass integration. Players will be able to help out fellow travelers by tagging them and reviving their incapacitated Pokemon through the use of "reviver seeds."

Pokemon Mystery Dungeon: Gates to Infinity will emerge from a pokeball near you on March 24, 2013 for the 3DS. It will feature up to 4 player local co-op.