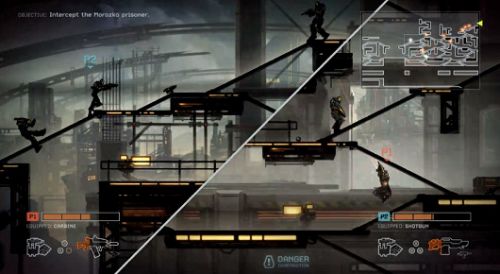 Fallen Frontier was first announced back in March of 2011 and since that time we haven't heard much from the game created by ex-Bungie developers.  We went hands on with the title during PAX East of that year and were particularly impressed with some of the cooperative mechanics for the platformer, and equally drawn in by the "concept art" style of its graphics.

There was a lot to like with what we played of Fallen Frontier but it was indeed odd we haven't heard from the game in almost two years. Sometimes that's a good sign and sometimes that's a bad sign.  It appears it's the latter in this case as developer Moonshot Games have announced the title is currently cancelled.  So what happened?

Post-PAX we came to the grim realization that the market had shifted pretty substantially since we first started working on the game.  The console downloadable platforms had plateaued somewhat, and publishers were less excited about investing there. A game that had sold itself easily the first two times all of a sudden became a much harder sell the third time. By that time, the real interest and the accompanying dollars seemed to had moved on to mobile and social.

The Moonshot developers had left the world of big budget games with the hope of creating smaller quality titles that could be put out more quickly. Two years ago the downloadable space was very different, and its interesting to see a developer actually point out just how much that area has stagnated on consoles.  Fallen Frontier needed a publisher and but the deals just kept falling through because of a changing landscape. 2011 might have actually been too late for Moonshot - publishers had already realized the console space for downloadable games had changed.  They wanted to put money elsewhere.

We arrived at the XBLA/PSN space a year or two too late. If we had been showing the game at PAX 2009 rather than 2011, we would be telling a different story right now. But by 2011 the publishers' appetite for development funding in the console downloadable space had evaporated – probably for pretty good reason – and the only deals we were hearing them sign were distribution deals.

That said, with so much work having been done perhaps there's a chance for an indie release on PC, as that market is one that continues to grow.  But perhaps the most disheartening thing is that Moonshot claims the game paused development while only being a third completed and it doesn't seem like they want to use Kickstarter as an alternative means of funds.  In the meantime Moonshot is working on a game for tablets called Third Eye Crime and it'll be on display at the PAX East Indie Showcase next month.

So if you got to play Fallen Frontier at PAX East 2011, consider yourself lucky.