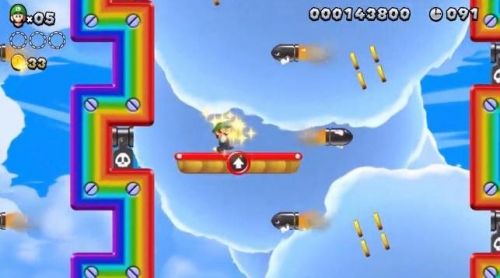 Today was a big day for Nintendo fans in the form of another Nintendo Direct broadcast. During the show, Nintendo president Satoru Iwata appeared to viewers donning Luigi's iconic hat. He proclaimed this year to be the "year of Luigi." Finally, everyone's favorite sidekick plumber will receive the superstar treatment.

To coincide with the theme of Luigi, a new DLC was showcased for New Super Mario Bros. U. The featured content will be aptly titled "New Super Luigi U." The addition is super sized, featuring an alternate version of the levels found in the main game. All said, there will be about 80 new levels of Luigi-themed content, featuring "a whole new level of gameplay challenge." Players will also be able to freely switch between the original game stages and the new Luigi ones. The content will be a single time download rather than a collection of downloads. As of now, there is no firm release date, only a promise by Iwata that it will be released sometime this year.

While the original game featured very substantial local co-op with up to five players, it remains unknown if the DLC will feature co-op. If the content does pull through cooperatively, we can probably expect the same type of cooperative experience offered in the original game. If you missed our original New Super Mario Bros. U review, go ahead and take a look here. Until then, keep your green hats ready for the green plumber to debut sometime later this year.