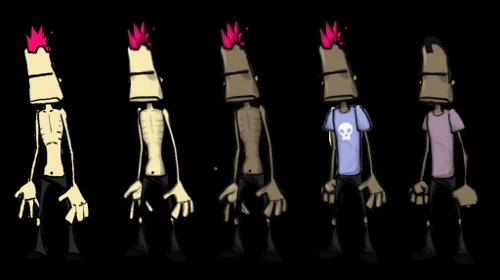 Ska Studios has slowly been releasing pieces of concept art and screenshots for its upcoming Xbox Live Arcade beat-em-up RPG (brawl-PG, if you will) Charlie Murder. The most recent piece shows Lester Deth's transition from shirtless punk with pale skin to a shirt-wearing punk with darker skin. Actually, several of the characters seem to have started out shirtless, including the band's manager and hypnotist, Kelly Skitten. Don't worry, though. Resident massive human, The Rexecutioner, is still brawling and drumming topless.

Inspired by River City Ransom and bearing some resemblance to a grunge version of Scott Pilgrim, Charlie Murder revolves around the titular band trying to put a stop to the evil activities carried out by rival band Gore Quaffer. Gross, but totally awesome at the same time.

Charlie Murder will support co-op for up to four players both locally and online. Still no confirmed release date, just the old "it'll be ready when it's ready".