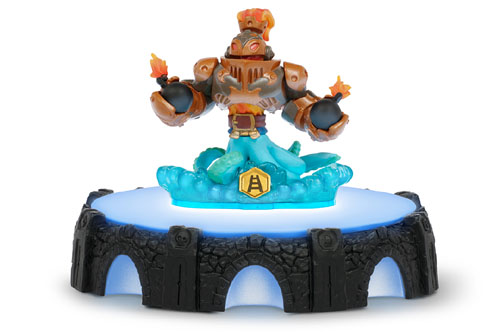 The upcoming Skylanders SWAP Force has a host of new improvements and additions to the previous two titles.  Players will be able to create 256 different character combinations from the 16 new bifurcated figures. There will also be 16 new Skylanders, eight LightCore Skylanders, and 16 returning Skylanders. There's also the ground breaking new gameplay function that allows characters to jump! Seriously. If you've played the game you know how big of a deal this is.

What you might not know is that you'll need a new Portal of Power for this new game. That's right, more plastic stuff. Before you freak out, remember that all of your old Skylanders and their precious earned levels and abilities will still be completely compatible with Skylanders SWAP Force.  But the new SWAP feature will require a new Portal, which you can see above.

I'm a little disappointed Robertson didn't ask Hirshberg how big of a pile of money he sleeps on. I'm guessing it falls into the large to huge range.

So there you have it, Skylanders fans. You'll have to shell out some extra cash for the next big thing in plastic. Or will you? I picked up my starter set for the price of a regular game at a retailer back in 2011. I wonder if we'll see similar sales this holiday season. Probably not, since we're all hooked already. Maybe this will be enough to get me to quit cold turkey... I did just buy a plastic whale from GameStop for $15 bucks a few days ago... and that one with the bombs looks sooooo coooool. Who am I kidding? I can't quit you, Skylanders!

Skylanders SWAP Force supports two player local co-op. It will be coming to most systems in the fall. Activision has yet to list a price for the new starter kit.