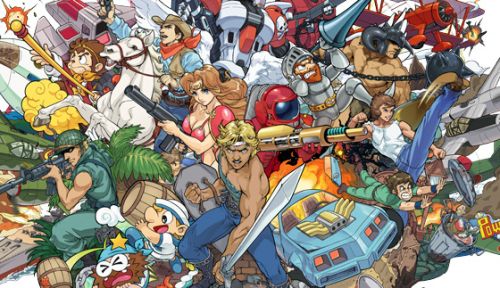 Capcom’s 30th anniversary is officially underway! If you’re a fan of old-school games like we are, please be aware that the first “1987 Pack” within the Capcom Arcade Cabinet promotion is now available on both the PlayStation Network and Xbox LIVE Arcade.

Going on from now until May 21st, a total of four packs will be featured within the Arcade Cabinet for all lovers of the retro era. In the current “1987 Pack” being featured, we have the titles: 1943: The Battle of Midway, Black Tiger, and Avengers, with Avengers (not THE Avengers superhero team, just Avengers) and 1943 being the co-op games to look out for. Avengers is a 2-player Brawler game with a top-down perspective, while 1943 is a WWII, fighter-plane shooter that’s also 2-player:

The “1987 Pack” is now going for $5 (400 MSP), while all the other game packs will be going for $10 (800 MSP) in the future. Later on into the promotion, Capcom will be selling each individual game for $4 (320 MSP) if anyone doesn’t want to buy the entire pack of games. The next game pack will be featuring Ghosts n Goblins, Gun.Smoke, and Section Z, arriving on March 5th. However, if anyone wants to see what else is incoming, check out our previous article here.

Do check out the gallery below of all the games featured in this pack. Cheers!