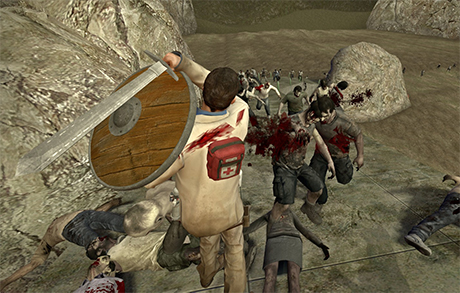 There's a new survival map available for Left 4 Dead 2 on PC called Helm's Deep Reborn.  It's based off the fortress featured in the second Lord of the Rings movie, The Two Towers.  The map is available via the Steam Workshop and you can play it via official Valve servers.

In the map, players start inside Helm's Deep and ready up with traditional Left 4 Dead weapons, or if they choose, they can grab a sword and a shield for that authentic fantasy flair.  Once outside it's time to head up to the wall and look out into the battlefield.  There's various heavy machine guns you can use to repel the invading zombie horde and there's a handful of AI guys on the wall as well.  Eventually the zombies will breach the wall and it's up to your co-op team to figure out what's next.

Let me just say right now, Legolas is a bastard. He will block your retreat.

We played the map a handful of times trying to earn ourselves a few survival medals, but barely managed to survive past the bronze. A special enemy like a charger or smoker can really throw a monkey wrench into your plans, especially if you get knocked off the wrong side of the wall. That said, the combat is extremely satisfying and there's so many zombies to kill. With the open nature of the battlefield it's truly impressive to see hundreds of them running at you.

Helm's Deep Reborn is available to download right here.  There's no word if Gandalf arrives at dawn, you'll have to survive that long to find out.