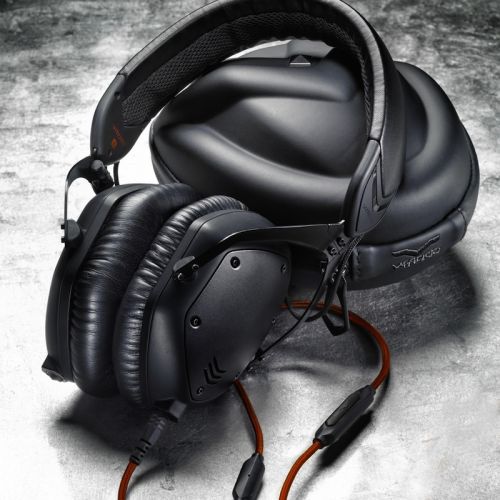 Over the years I've reviewed, worn, listened, and tried dozens upon dozens of gaming headsets. They've all had one thing in common - they were designed for gaming and communication first and audio second. That's not to say any of these headsets sounded bad - the Astro A30s still are still my go to headsets I use almost daily. But the latest headsets I've been testing are different - they were designed with audio in mind first.  In fact the V-Moda Crossfade M-100 stereo headsets were designed "by the community" for both their weight, feel, and audio tuning.

The first thing that's immediately apparent when opening the packaging of the Crossfade M-100s is just how small these headsets can become. The headsets collapse into a nice heavy duty carrying case which is capable of storing some cables, the headphones themselves, and any adapters. There's a nice clicking action as you fold and unfold the headphones and it's obvious they are made of quality material.  There's a good mix of plastic and metal construction with heavy hinges and gold trimmed connectors. The metal plates on the ears are interchangeable and you can even custom order a design from V-Moda's site. Two cables are included in the box - the first is a black braided cable with two connectors on the end to allow you to share the output of whatever device you are listening to with someone else.  The second cable is a heavier duty braided orange cable with an inline mic and a button for muting. It's clearly designed for use with mobile devices like phones, tablets and MP3 players, but it works perfectly in a PlayStation Vita. Sadly because of the design of the mini-plug (which includes microphone and stereo output in one connector), you won't be able to hook them up to a PC for microphone audio unless you have an input jack that supports that type of connection.  If you pick up the Boom Pro Mic kit ($39.99) for the headset, you'll get a better quality microphone and an adapter cable required to hook it up to the PC.  It's a nice flexible design and the quality of the recording via it was more than acceptable.

The design of the Crossfade M-100s allow for some flexibility - whatever cable or accessory you choose to use with it can be plugged into either side of the headset. the headband is adjustable as well and it sticks in place pretty well. I've used the M-100s for extended sessions - I'm talking 3-4 hours at a time while programming and gaming - and for the most part they are comfortable, but there is some ear fatigue. Being mostly metal they aren't the lightest headsets out there, but they aren't "heavy." Audio wise the M-100s push out rich sound with deep bass. I've used them almost non stop now at work for two weeks to listen to a good variety of music from a number of genres including Rap, Rock, Techno, Classical, and game soundtracks - and every single one of them I picked up details I previously hadn't heard before. These are a closed headphone design, so for the most part you can't hear external noise. Some people prefer this to the open design of something like the Astro A30s - I personally don't have a preference.

Gaming wise I played Dead Space 3 on the 360 and enjoyed deep aural kicks from the weapons and excellent sound stage despite them being only stereo headsets. I tried numerous games on the Vita including Star Wars Pinball, Earth Defense Force Portable, and Alien Breed.  Again the quality jump over the built in speakers or even my Astro A30s were noticeable.

Now we come to the part of this review where we talk about price. It's sticker shock for sure - we're talking $310 for the headset, case, two cables, and an 1/8" adapter. Coming from a purely gaming perspective - you'd be nuts to pay that with several other quality solutions on the market. But as a musical set of headphones that are versatile enough for mobile gaming, pc gaming, and use on phones and tablets? Perhaps it becomes a bit more worth it. There's also a solid 2 year warranty with the V-Moda M100s and a lifetime "immortal life" warranty included.

In the unlikely event you run over your headphones with a tank, with the V-MODA Immortal Life Program, you get 50% off a replacement for a lifetime.

I was told a tank isn't required for warranty redemption.

Bottom line the V-Moda Crossfade M100s are the best sounding headphones I have ever used. They are now my day to day headphones replacing an old Sennheiser pair. I absolutely love listening to music and playing portable games with them. The case and portability of them make it easy to just toss it in my backpack and bring with. If you've got the money and want one of the best headsets on the market, I can easily recommend the M100s.

A demo unit of the V-Moda M100s and the Boom Mic Pro kit were supplied by the company for review purposes.