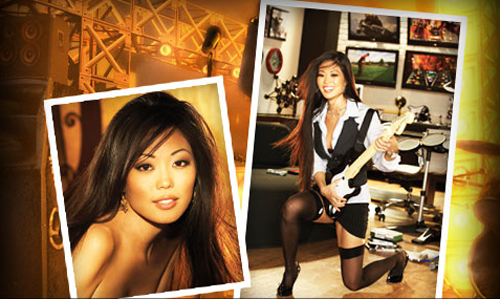 Here's a slightly off topic news post.  We all know there's an ongoing battle for the best music game out there.  Whether it's Guitar Hero, Rock Band or Rock Revolution everyone has an opinion on which one plays better, has better music and has the best co-op experience.

Ex-Activision PR Rep Grace Kim has an opinion too, and her's might carry a little more weight.  If you didn't know, Activision publishes Guitar Hero: World Tour.  And when Grace left the PR industry to pose for Playboy, they wanted to show her gamer side.  But as you can see above, Grace didn't pose with the Guitar Hero kit, no, she chose Rock Band's Stratocaster instead.  That's right guys, the November Playmate of the month posed in Playboy with plastic guitars and drums.  Look how far we've come.

But the backhanded slap to Guitar Hero didn't end there, nope.  Instead in an interview with gaming network G4 she called Guitar Hero World Tour a "bit of a rip-off of Rock Band" and even disses the drum kit a bit.  If you want to see the full video, and even a link to the magazine shoot, click the read more link.