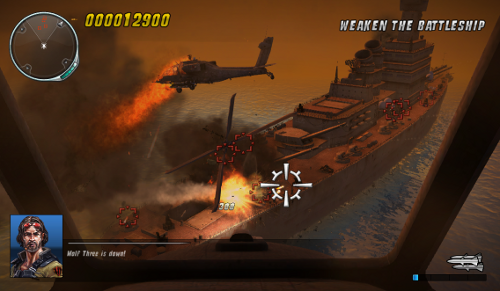 It's helicopter time! Or, it will be in a few months, anyway. Ubisoft recently announced that its upcoming flying/blowing everything up arcade game Thunder Wolves will reach PC, Xbox Live Arcade, and PlayStation Network in the second quarter of this year. Developed by bitComposer Games and Most Wanted Entertainment, Thunder Wolves puts players behind the controls of some serious flying machines to carry out missions across four different regions. Co-op mode allows two local players to team up and play as pilot and gunner of the same helicopter, which is about as cooperative as you can get. We encourage sitting in the same chair for maximum realism.

Missions in Thunder Wolves range from "destroy everything you see" to stealth, escort, and protection. Everything in the environment is fully destructible, so we're predicting some epic co-op games where missions are ignored in favor of shooting down every building and every tree in sight.