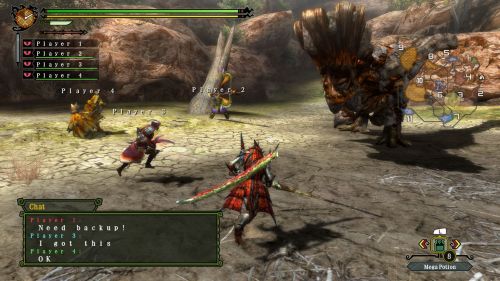 There are a total of 73 different monsters in the title. These include all of the monsters from Tri, a good portion of the ones from Monster Hunter Portable 3rd, Plesioth, and Green Pleioth. New species and subspecies have also been added, including the brand new Brachydios. Here is a list of the new monsters in this outing:

In addition to the monsters, there is a new AI companion. He is a shakalaka named Kayamba. Of course, Cha-Cha will be present as well. They are both customizable with their abilities, dances, and 18 masks.

For more specifics, there are now 211 new quests, bringing the grand total to 339 quests (not including DLC ones). For equipment, there are 2042 new pieces present in this game, with a grand total of 3061 pieces. Finally, there are three new areas: The Tower, Misty Peaks, and the Tainted Sea.

This was a tangible list of additions to give you an idea about the new content in Monster Hunter 3 Ultimate. The game will feature up to four player local play on the 3DS, and up to four player local and online play for the Wii U. For a more detailed analysis of the game, stay tuned for our full review, which will arrive soon.