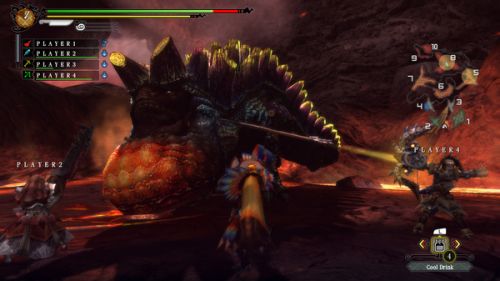 Monster Hunter 3 Ultimate will be launching on the the Nintendo Wii U and 3DS in just a few short weeks. You'll have a chance to play it even sooner when the demo drops this Thursday, February 21st. If you're unfamiliar with the Monster Hunter series, I'll offer you this quick crash course: You hunt monsters. Hooray! There's more to it than that, of course, but you basically join with some friends and then battle huge beasts. Once you've claimed victory you can strip their carcasses for raw materials (the monsters, not your friends) which you can then use to craft better armor and gear.

The Wii U and 3DS versions are basically the same game, except the Wii U will sport HD graphics. Players will be able to transfer save data between the two systems. As we've mentioned before, MH3U not only allows players to transfer save data, it also supports cross platform play. This means those of you lucky enough to have a Wii U and three friends with a 3DS (each with your own copy of the game) can all play together. Wii U owners can also reach out and touch other Wii U players through the magic of the internet. Franchise producer Ryozo Tsujimoto will fill you in on the details in the following video.

Nothing like getting jacked up by a mini godzilla while the game's producer is addressing the masses. Ouch.

True monster hunters will want to pick up both the Wii U and 3DS versions of the game. At $60 and $40 respectively, that can get a little pricey. Amazon will help soften the blow to your wallet by offering $20 off if you order both versions of the game at the same time. Check out the demo and see if they're worth your $80.