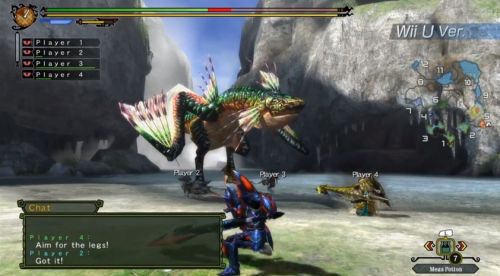 Monster Hunter 3 Ultimate is looking good on the Wii U. Sure, it's basically an HD "Turbo Edition" of the Wii's Monster Hunter Tri, but it may be new to you. There are new monsters to hunt, and some sweet interconnectivity between the Wii U and 3DS versions.

The following three videos boast HD graphics from the Wii U version of the game. It seems that AI companions will be along for the ride. The third video features two player co-op along with AI buddies.

In the first video our heroine faces off against some sort of abominable polar rabbit. Let's see how that works out for her:

In case you didn't know, the Monster Hunter series allows players to make weapons and armor from the bodies of the monsters they slay. That's why her sword looks like it's made out of marlin parts. You can understand why the monsters are so upset. No one wants to be a pair of boots.

The next battle takes place way too close to a volcano:

Here we can see homeboy wielding what appears to be a giant spiked testicle. Vicious. The monster itself is some sort of dinosaur that has been afflicted with a radioactive face and fists to match. The two companions, Cha Cha and Kayamba, seem to have mastered the art of getting killed, a valuable skill for any friendly AI.

The final video features two real players working to beat a monster cooperatively. I can tell because the other character is called "Player 2."

Two heroic monster hunters square off against what I assume is the final form of a playtpus. Cha Cha and Kayamba do their thing while the hunters wield impossibly large weapons torn from fallen foes. Good stuff. If I see a few more games like this I may be tempted to pick up a Wii U. Maybe.