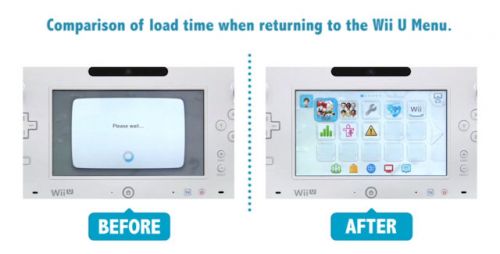 Most would agree that the Wii U loading screens haven’t been the most convenient for gamers. However, Nintendo is doing major work to improve on their system and remedy the situation. An upcoming Wii U system update will help to fix problem and speed up the load times between menus and returning to the home screen.

Thus far in the Wii U’s life cycle, we’ve been enduring some very long updates for the system, let alone the normal load times for regular usage of the console. As a Wii U owner, I also find these loading screens to become quite tedious if I tend to switch between online features or games a lot. Luckily for us, Nintendo is making the effort to significantly improve the time it takes to leave a game and head back to the Wii U homescreen. Not only that, but they’re also reducing the time it takes to load into a game as well. Satoru Iwata of Nintendo wrote his first message on the Wii U Miiverse yesterday, explaining the changes being made to the system:

Hello, this is Satoru Iwata of Nintendo.

As we announced in the January Nintendo Direct, we plan to release two Wii U system updates. One in spring, and one in the summer.

Today, I would like to let you know the status of these two updates.

We still have tests remaining, and it will take a little more time until we can release the update. But today, we have prepared a video so you can see how the loading time will change when returning to the Wii U Menu with the system update, so please take a look if you are interested.

In the future, we would like to share announcements about Nintendo Direct events here, so we appreciate your continued attention.

And lastly, like in other Announcement Communities, please understand that while we read every comment, we are not able to reply. Thank you.

As stated, this update is scheduled to go live sometime in April, though no official date has been revealed. This update is shown to reduce about 15 seconds between the current load times, shown in the demonstration video below: