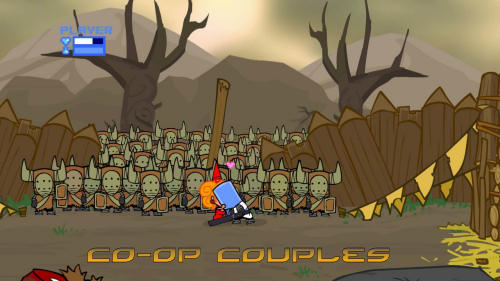 Everyone remembers the “glass ceiling”, right? For most of us, probably came up in Social Studies, somewhere between the fourth and seventh grades. The glass ceiling was the woman’s equivalent to racial discrimination. Today, the term is described by a broader realm of discrimination, specifically within a workplace or organization. As an example, we’ve recently seen the glass ceiling shattered by a female candidate for Vice President of the United States, and again by the result of the 2008 race for President of the United States, which was won by a man who is racially mixed, and therefore represents a demographic minority.

Going back to last week, however, a more intimate setting – the McLaughlin home – saw the glass ceiling ruptured in a flurry of co-op Castle Crashers. An invitation to join Nick (bapenguin), Mike (pheriannath), and a friend of Nick’s for some co-op gaming turned into an evening riot of hilarity and fun when our fourth player decided to decline at the last minute, leaving one spot open for my Co-op Couples partner.

My wife and I had just finished a few rounds of Spider-man: Friend or Foe, which is an absolutely awesome game for playing with someone that isn’t the gamer that we at Co-Optimus pride ourselves to be. Despite that my wife does not consider herself a gamer per se, I was glad to leave the ugly arena that was littered with the bones of my attempts to show her the natural, instinctive skill of a true gamer with more points in his Gamerscore than dollars in his paycheck. In other words: she spanked me, and not in a good marital way.

“Make sure you tell them how badly I beat you!” she crowed as she took a quick break to change into her pajamas.

“Tell them yourself!” I called after. I knew she wouldn’t, though; she still hadn’t warmed up to online gaming enough to actually use the voice chat.

After a few attempts to find out which of us could successfully host a four-player game of Castle Crashers – all the while speculating how nice it will be when the patch comes out – we chose our characters. My wife’s Orange Knight at level 5 was just fine for her. Nick showcased a well-rounded Yellow Knight leveled in the high twenties, and pheriannath laughed us all the way to the main map with a Green Knight at level 38 plus perks that I hadn’t even come across yet. Since my preferred main character was also the Green Knight, I was stuck with the next-highest from my collection, which happened to be Alien Hominid, conveniently matched at level 5 with the Red Knight.

Thus we started our journey, which would be unfortunately short-lived. Vying with several hang-ups – including the halt of the Orange Knight as our female cohort ran periodically to check on the cake that she was baking – we still managed to have a great time. We played for less than an hour before everyone went our different ways for the remainder of the night, but we squeezed out a solid 45 minutes of hacking, slashing, stomping, and joking around. Mike was able to nab two achievements, though these were forcefully created by him ordering us around.  I think we were all scared of his Green Knight powers.  We all gained several character levels cumulatively, and I got to top off the night with cake, straight from the oven.

There’s something positive to be said about having the patience to let a novice join your party, and I’m really grateful that “the guys” were completely cool about my wife dropping in to help them practice their revival technique (who am I kidding…my pitiful Alien Hominid had to be revived just as many times). In retrospect, I feel like that evening’s experience made some headway in opening the door to the world of co-op a little further for my wife.

Since that time, I’ve been able to cajole her into joining another friend and his wife for a run-through of select levels from the Halo 3 campaign. This time, she wore a headset and started all kinds of conversation. Eventually, I just took mine off and let the women chatter (a post-game text message exchange with my buddy confirmed that he did the same).

“Unprecedented”…“historic”…don’t be confused by the mass media: this week will not go down in the books for the election of the United States President, not for this Co-Optimer. One day, history will show that the glass ceiling was assaulted at my house, and it scares the crap out of me.

Oh, and since you were wondering: it was a yellow cake with chocolate icing. It was so very good, and the leftovers are still in the fridge, calling my name. Forget you, GLaDOS, I’ve got my own cake.