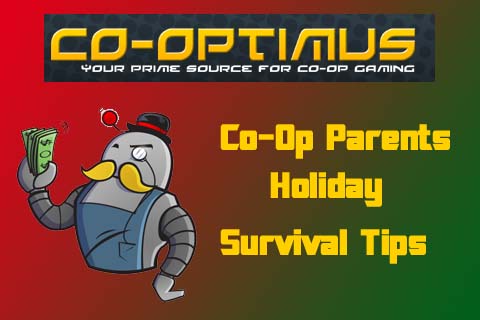 In light of the current economic crisis, we here at Co-Optimus feel compelled to do what we can to alleviate your financial woes.  The experts may say that the gaming industry is recession proof, but if you're like me, your wallet says different.  To top it all off, the holiday season is just around the corner, and that's an even further drain on your disposable income.  Of course, this is even worse for those of us who have children.  What's a gaming parent to do?

There are several steps you can take to make sure both you and the kids are happy this year.  I've developed these methods, some of them quite devious, over my decade as a parent, and so far, it's worked out pretty well.  Without further adieu, here are Co-Optimus' tips for getting your kids to buy the games you want!

This works best for older children.  Teenagers are notoriously hard to buy for.  In the past few months alone, my 14 year old son has expressed an interest in a flat screen TV for his room, an electric guitar, an Ipod touch, and other expensive stuff.  Each of these are obviously big ticket items, and so there's no way that he can expect to receive them as a gift from one person.  Naturally, there's one way around it: he asked for gift cards and cash for his birthday this past September.  All told, our son received a small fortune in cash and gift cards.  I bought the gift cards from him, at face value, at his request.  He decided to save it all, along with some lawn mowing money. He ended up with a sum in his savings worthy of a young Scrooge McDuck, well on the way toward a small Black Friday HDTV.

Now, I love my big screen as much as the next guy, but I still think that's too much for a TV for a teenager.  Besides, there are many more things that he'd enjoy more.  Like, oh, I dunno... the full band version of Guitar Hero World Tour, for instance.  Yes, all it took was a look at the Sunday ad at Best Buy the day it was released.  The boy has the patience of Job but even he couldn't resist the allure of an awesome fake guitar with a touch pad.  The fact that I wanted to get the complete set myself had very little to do with his purchase.  Really.  (See technique three for more on this.)

Maybe you don't have a teenager?  Worry not, this method is tried and true with the under 10 set.  The allure of the toy aisle can be quite strong for kids this age.  (And their fathers, too.)  Like everything else in the world, toys are getting expensive.  We blow through the $10 and under toys pretty fast, what with all the trips to the store we make each month.  Eventually, you're going to run out of cheap stuff that your kid has an interest in.  Sure, there's lots of more expensive toys they'll want.  If you're like me, though, you can't just drop $50 on a LEGO X-Wing, or a remote control helicopter, or stuff like that every time you need to buy milk.  This is when you say, "No, that's too much for tonight.  How 'bout we go look at video games?"

No kid worth his or her salt is going to refuse.  Especially when they have a gamer parent like yourself, and have been brought up in the ways of the controller.  Now, your task is simple.  $10 per kid (or whatever you consider a reasonable amount for a toy trip) times how many kids you have, and presto!  Find a game that costs that much, or under.  Don't make the mistake of getting a single player title, though!  Those cause way more arguments than they are worth.  Co-op is the way to go, even for the young 'uns.  Wii and PS2 titles are the real winners here, for the plethora of budget titles, but an occasional 360 gem can be had on the cheap as well.  Lego Star Wars, Zak and Wiki, GRAW 2, and Fantastic Four: Rise of the Silver Surfer are all decent co-op titles, and you can get out of the store with one of these instead of a tenth Spider-man figure or Barbie #37. 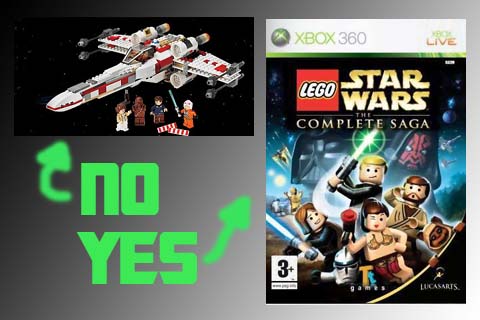 Kids these days are inundated with advertisements.  Toy catalogs from all sorts of different retailers come in the mail.  TV commercials are always a major factor, and sometimes even the shows themselves are ads.  Of course there are various video games and toys based on TV shows and movies as well.  It can really overwhelm a kid.

But don't count out your own influence!  All kids, whether they admit it or not, at least consider what their parents have to say.  This is why you need to drop hints early and often.  Show them pictures of cute little Sackboys .  Mention all the cool new songs in this year's crop of rhythm games.  Play the first Viva Pinata, and then casually mention that the sequel allows for 2 players to play locally.  Stuff like this starts the wheels turning in their little heads.  They'll be far more likely to ask for games that you want too!  Some games are easy sells for kids, of course, like LittleBigPlanet, but don't go overboard and extol the virtues of Left 4 Dead to your toddler.

Another great influence is the Co-Opticast.  I played an episode in the car on the way to school, and the teenager was apparently listening.  I overheard him calling his uncle, himself a gamer, who we'll be visiting during Christmas break.  For quite a while they talked about Gears of War 2's horde mode and the zombie level in Call of Duty: World at War, as featured in the latest Co-Opticast.  I twirled my moustaches and laughed: mission accomplished! 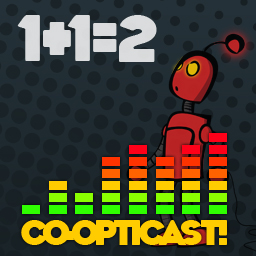 This final method is similar to number two, but reversed.  I like to use this when a big game has hit the stands, and I'm getting it no matter what.  Pick up the highly anticipated title immediately.  If (more likely, when) the kids ask if they can get something too, just put you hands on your hips and look stern.  "Now listen, this game isn't just for dad; it's for all of us!  Don't you think that's enough for today?"  In other words, the classic guilt trip.  As long as you picked a good co-op title (and as a reader of this site, I'm certain you did), this should work like a charm.  I've used this exact method to great effect for Rock Band 2 and Viva Pinata 2.  Trust me, as long as you've already practiced the earlier methods, it should work quite smoothly.

Being a parent can be hard, even in the best of times.  Living without the latest awesome co-op titles can be even tougher!  By following these easy steps, you can have your cake and eat it too: the kids are happy, and, more importantly, you are happy!  It's a real win-win situation.  If others, like your spouse, family members, or the Division of Family Services accuse you of being manipulative, or heavy handed, just ignore them, and turn up volume on the Co-Opticast .  Tune in next week, where we'll discuss getting into the kid's college fund to finance that vintage Corvette you've always wanted.